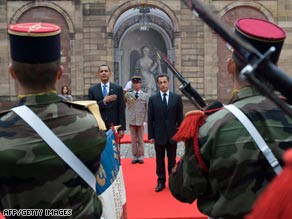 Obama was addressing an audience in Strasbourg, which is co-hosting the summit with Kehl in Germany on opposite banks of the River Rhine, afterr earlier holding talks with French President Nicolas Sarkozy.

Afghanistan tops the agenda at the summit with Obama calling on other NATO members to take on a greater role in thee fight against Taliban and Islamist insurgents.

U.S. forces have borne the brunt of the conflict since leading the invasion that overthrew the Taliban in 2001, following the al Qaeda terror attacks against New York and Washington.

Obama said Friday he had asked other NATO states to provide more military and civilian support and warned that al Qaeda was still plotting terror attacks in the border regions of Afghanistan and Pakistan.

"Al Qaeda is still a threat and we cannot pretend somehow that because Barack Hussain Obama got elected as president everything is suddenly going to be ok," Obama said.

"If there is another al Qaeda attack it is just as likely, if not more, that it will be here in Europe, in a European city."

At an earlier joint press conference, Sarkozy said France would be open to accepting a released prisoner from the Guantanamo Bay detention facility if that helps bring about its closing.

Sarkozy has criticized Guantanamo and said he is "happy and proud" Obama decided to close it.

Obama reiterated the United States' commitment to NATO, describing it as the "most successful alliance in modern history."

"The basic premise of NATO was that Europe's security was the United States' security and vice versa," Obama told reporters. "That is a pillar of American foreign policy that has been unchanging over the past 60 years. It is something that I am here to affirm."

Obama said the U.S. wanted strong allies and was looking to be a partner with European countries. "The more capable they are defensively, the more we can act in concert on the shared challenges that we face," he said.

"One of my messages to our NATO allies is going to be the more capability we see here in Europe, the happier the United States will be, the more effective we will be in coordinating our activities."

The French president indicated he wanted his country to be strong enough to "stand up to the challenges" that it faced and have defense at the fore.

British Prime Minister Gordon Brown's office said the UK was prepared to consider an increase in troop numbers in Afghanistan on a temporary basis to provide additional security during the forthcoming presidential election -- but said an agreement would be "subject to burden-sharing agreements at the NATO summit." A source familiar with the proposal said the troop increase would be in the "mid-high 100s."

Summit co-host France, which is rejoining NATO's high command this weekend after more than 40 years, has rarely seen eye-to-eye with the U.S. on military matters.

Sarkozy pledged a relatively small group of 150 gendarmes this week to help train Afghan police and observers wonder if Obama will face an uphill battle in bringing other allies on board.

De Hoop Scheffer told CNN that was "too gloomy a conclusion" and said European allies are already starting to contribute more.

"That doesn't happen in one big bang at the summit, but they are beefing up their forces," de Hoop Scheffer told CNN. "Afghanistan should not become President Obama's conflict but should become a collective, coordinated operation of all of us."

Obama made clear at the G-20 summit in London this week that he wants to restart relations with Russia. He said Friday he had a "terrific" meeting with Russian President Dmitry Medvedev.

"I think that it is important for NATO allies to engage Russia and to recognize that they have legitimate interests in some cases, we've got common interests, but we also have some core disagreements," Obama said.

But some NATO members are reluctant to agree with him, particularly eastern European countries like Poland and the Czech Republic that used to fall under Russian influence as members of the Soviet bloc.

Pierre Lellouche, an author and NATO watcher, said he believes those countries will come around to Obama's plans.

Saturday's agenda will also see Albania and Croatia welcomed to the alliance as they finalize their accession process at the summit.

Some 300 NATO protesters were jailed Thursday in Strasbourg, Germany, just across the border from the French side of the city, police said, and 105 of them were still held Friday.

Thursday's protest was violent, with demonstrators breaking property and throwing stones. All was quiet Thursday night and Friday morning.

All About Afghanistan • Russia • NATO • France