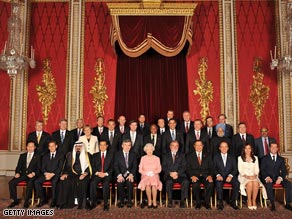 Just after this photo was taken, the Queen, center, appears to get annoyed with Silvio Berlusconi.

The queen joined the G-20 leaders for an official photo to mark the summit.

After the photo is taken, Berlusconi can be heard yelling: "Mr Obama," at the U.S. president in an attempt to get his attention.

The noise appears to rile the queen who turns in Berlusconi's direction, shrugs her shoulders and says: "What is it? Why does he have to shout?"

A Buckingham Palace spokeswoman Friday rejected suggestions the queen was annoyed with Berlusconi.

She told the British Press Association the reception was "warm and friendly" and said everyone involved was good-natured.

"It was loud and jolly and very jovial, there were no gaffes and no offense taken."

Italian media have labeled the incident another Berlusconi gaffe.

Berlusconi is renowned for his gaffes. In November he described Obama as "handsome and suntanned."

He was also forced to issue an apology to his wife, Veronica Lario, in 2007 after she read reports of him approaching several women at an awards dinner and declaring: "If I wasn't married, I would marry you straight away."

Lario received the apology after sending a letter criticizing her husband to a newspaper in which she said his behavior was "unacceptable" and "damaging to my dignity."