ISTANBUL, Turkey (CNN) -- Regular programming has just been interrupted by a news conference. A slender black man in a suit steps up to a podium, flanked by American flags and a White House logo. 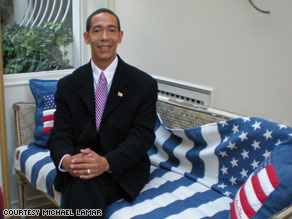 Michael Lamar, pictured after a Democratic fundraiser, has been in ad campaigns in Turkey and the Netherlands.

"I wish I could announce such an economic package," he says, "but there is a bank in Turkey that did it. It is Garanti. I wish we had Garanti in America."

Don't be fooled. This is a commercial on Turkish TV. The actor is a 44-year-old Barack Obama look-alike from Whitehall, Pennsylvania, named Michael Lamar. And he is shilling for a Turkish bank.

In the month before the real Barack Obama is to visit Turkey, this ad campaign went out all across the country on television and on billboards, using the iconic image of the American president to sell low-interest loans.

The men behind the concept say their Obama look-alike was the perfect guy to sell what they described as Garanti Bank's own economic stimulus package.

"We probably wouldn't be doing this commercial if it was the previous president," said Can Celikbilek, a copy writer at the advertising company, Alametifarika. "But in the case of Obama, he does represent hope, not only for the States but for the whole world."

For Obama look-alike actor Lamar, there was some irony about getting flown to Turkey to star in a commercial for a bank. He is a recent casualty of the global economic crisis.

"I was laid off in January of this year from JP Morgan Chase Bank in the U.S.," Lamar said, in a telephone interview from Pennsylvania. "After 18 years in the company, I was just laid off. One of the cutbacks. I'm currently unemployed."

Lamar's striking resemblance to the American president has suddenly offered the former software analyst a possible new career for supporting his wife and child.

Lamar is now being represented by a casting agency in Los Angeles that specializes in celebrity look-alikes.

Since he discovered his new "talent," he has traveled to the Netherlands to appear in a commercial for a liquor chain and to Paris, where an activist organization brought him in to meet lawmakers at the National Assembly, as part of a campaign to raise awareness about racism and racial profiling in France.

"This was very exciting for me, a true privilege!" Lamar said.

During his brief visit to Turkey, locals did double-takes when they saw Lamar walk past.

"Even in the studio, the crew [members] were like, 'Oh! Is that Obama?" said Celikbilek of Alametifarika advertising.

Using the image of an American president to promote anything in Turkey is a remarkable reversal.

U.S. approval ratings in Turkey plunged to 9 percent, according to a 2007 Pew Research poll, making America less popular in Turkey then almost anywhere else in the world, even though the two countries are NATO allies.

There was widespread anger among Turks at the war in neighboring Iraq. But the election of Barack Obama appears to have dramatically improved perceptions of America.

"Bush was a dictator who attacked other countries," said Abdurrahman Ozdemir, who sells cigarettes from a small stall on the street. "But we love Obama ... because he does not want to go to war with other countries."