LONDON, England (CNN) -- Several hundred Sri Lankan Tamil protesters shouted slogans at the British Parliament for a second day Tuesday, urging it to act to end the "genocide" against their people in Sri Lanka. 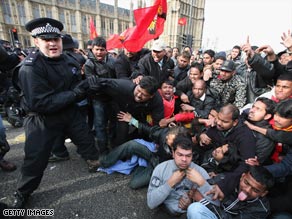 Police clash with Tamil protesters outside the Houses of Parliament.

"Stop the genocide!" they shouted. "Stop the war!"

They waved the red flag of Tamil Eelam, the Tamils' traditional homeland in northern and eastern Sri Lanka. The flag is emblazoned with a yellow roaring tiger.

Most of the protesters slept overnight on the streets around Parliament Square after beginning their unauthorized protest Monday afternoon. At one point, the protesters blocked the street leading to Westminster Bridge over the River Thames, police said.

That led to road closures around Parliament.

By Tuesday morning, a solid ring of police had hemmed the protesters in Parliament Square across the street from the Houses of Parliament and Big Ben. Roads were open again, but the protest and police presence caused traffic congestion in the area.

Hariram Shan, 24, is a Sri Lankan Tamil who said he has lived in Britain for six years. He said the protesters hope the British government will intervene to stop Sri Lanka's crackdown on Tamil Tiger rebels, which he said harms civilians.

"The Sri Lankan government has now cornered the rebels, the LTTE (Liberation Tigers of Tamil Eelam), and what they are doing is killing the people," she said.

Sukumar, who said she has lived in Britain since leaving her homeland in 1987, said she is angry at the British government for supporting Sri Lanka.

"The Sri Lankan government is doing their dirty work through this government," she said.

The Sri Lankan military said Sunday that it had captured the last rebel stronghold and killed five rebel leaders after three days of gunbattles.

It said more rebels could still be hiding in a 20-square-kilometer "safety zone," but that it would not enter the area because it is home to some 50,000 people.

The Tamil Tigers have fought since 1983 for an independent homeland for the country's ethnic Tamil minority. The civil war has left more than 70,000 people dead.