LONDON, England (CNN) -- The chief constable for Britain's Greater Manchester Police indicated Thursday there would have been the potential for terrorist acts this weekend if police had not made a dozen arrests. 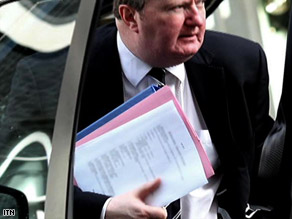 Bob Quick was photographed arriving at Downing Street holding a document revealing details of the raid.

"We would urge the public to be vigilant ... and contact the terrorist hotline if they see something suspicious," Chief Constable Peter Fahy said at a news conference Thursday.

Britain's chief terrorism officer resigned from the police force Thursday, a day after he accidentally exposed a sensitive document about the investigation.

The 12 people were taken into custody at several locations, mainly in northwest Manchester, Fahy said, and counterfoils police were questioning them and carrying out searches as part of the probe.

Watch more about the raids »

The terrorism threat level, which he said is already at a heightened state in Britain because of perceived threats, will not be raised, Fahy said.

He urged Britons to carry out their usual activities and said they didn't have to avoid certain locations. Arrest locations mentioned in the media are "pure speculation," he said, adding, "There is no particular threat against any particular location."

Fahy said the probe had reached a point where police felt they had to take action -- even without the blunder made by Metropolitan Police Assistant Commissioner Bob Quick, who inadvertently revealed a secret document to two media photographers at the prime minister's residence.

The document contained the names of those to be arrested. Once the word was out, police rushed to make the arrests. Fahy said those actions would have been taken in the next 24 hours anyway. Manchester is about 200 miles northwest of London.

"I have today offered my resignation in the knowledge that my action could have compromised a major counterterrorism operation," Quick said in a statement. "I deeply regret the disruption caused to colleagues undertaking the operation and remain grateful for the way in which they adapted quickly and professionally to a revised time scale."

Steve Back, one of the photographers who snapped the image, said he was at No. 10 Downing Street to cover a breakfast meeting of more than 30 chief constables. He photographed Quick as he arrived toward the end of the meeting, he said.

"I didn't know what I had until I put it in my computer," Back told CNN.

He zoomed in and was able to read parts of the document, with "Secret" printed atop the page.

"This is a Security service led investigation into suspected AQ [al Qaeda] driven attack planning within the UK," the document read. It described the "planned detention" of 11 people in Manchester, Leeds and Birmingham.

Ironically, the bottom of the document read, "Media strategy has been ratified."

Resigning was the only acceptable option for Quick, counterterrorism analyst Will Geddes told CNN. The blunder "does raise major concerns which would have led to a very major inquiry," Geddes said.

Metropolitan Police Commissioner Paul Stephenson said he continued to hold Quick in the highest regard despite his error.

London Mayor Boris Johnson also praised Quick's "long and distinguished career" and said he accepted the resignation with regret. "Bob understands fully that the security breach which occurred yesterday was a serious issue for which he has taken personal responsibility," Johnson said.

Quick is not the first official to be photographed with sensitive documents at Downing Street.

In May, then-Housing Minister Caroline Flint was photographed carrying notes that warned of a plunge in the property market. Photographers have caught Communities Secretary Hazel Blears carrying plans for a reality TV show starring the prime minister.

Though Downing Street is blocked to the public, the news media are allowed to stand as close as 20 feet from the front door.

"Time and time again, I've spoken to the press officer in Downing Street about this," said Back, the photographer.

All About Terrorism • United Kingdom