MADRID, Spain (CNN) -- The suspected leader of the Basque separatist group, ETA, and two alleged accomplices were arrested over the weekend in France. 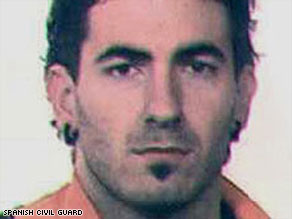 Jurdan Martitegui Lizaso is the fifth ETA suspect arrested in France in the past two weeks.

Those arrests occurred in France, from where ETA has launched a number of attacks into Spain.

ETA is blamed for more than 800 deaths in its more than four decades of fighting for Basque independence and is listed as a terrorist group by the European Union and the United States.

Rubalcaba said police had also dismantled two ETA commando cells before they could strike, one of them last October in northern Spain's Navarra province, and the other late Saturday, when the six suspects were arrested.

Martitegi's arrest came after police trailed an alleged ETA local leader from Spain to a meeting in France with Martitegi for a two-hour training session on the use of explosives and weapons, Rubalcaba said.

Police made the arrests in France right after the meeting, before the alleged local leader could return to Spain to share those details with his alleged commando cells, Rubalcaba said.

Police seized three pistols, two vehicles, and a small quantity of explosives from Martitegi and the two others arrested in France, Rubalcaba said.

"I think it's very good news and shows the constant police coordination and the cooperation between the police and the courts," Spanish Judge Baltasar Garzon, who was involved in the latest investigation, told reporters.

Martitegi is the fifth ETA suspect arrested in France in the past two weeks.

Given the heavy police crackdown, Rubalcaba said investigators have noted some internal discussion among ETA members about whether they should continue their armed fight or try for a negotiated end to the violence.

But he said the government, which held failed peace talks with ETA under three prime ministers since the 1980s, was no longer willing to negotiate.

"The process of dialogue is the past, and the past never returns," Rubalcaba said, adding that ETA would have to decide to end the violence itself, or the state would force the group to end it.

But top Spanish officials have repeatedly warned that ETA, while weakened, is not finished.

There are about 600 ETA convicts or suspects in Spanish jails and 150 others in French jails, authorities in both countries have told CNN.