LONDON, England (CNN) -- Police officers responsible for protecting the British royal family handled firearms when drunk, traded pornography and steroids and sat on Queen Elizabeth II's throne in comical poses, it has been alleged in a London court. 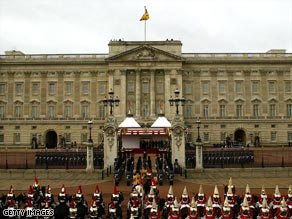 The former royal protection officer was responsible for security at Buckingham Palace.

The allegations were made Tuesday by John Cooper, the lawyer for former royal protection officer Paul Page, who is accused of defrauding colleagues and friends to fund a life of luxury, The British Press Association reported.

According to PA, the claims were made during a lengthy cross-examination of Adam McGregor, a colleague of Page who left service at London's Buckingham Palace in 2005, who has accused the former officer of "conning" him out of thousands of dollars.

At one point Cooper "suggested" there had been a procedure among armed officers at the palace whereby one officer on duty would sleep while the others kept watch for their superior.

McGregor denied any knowledge of this and all other allegations of wrongdoing among his colleagues at the iconic Royal residence. However, when pressed further he did admit to sitting on one of the thrones, but did not recall doing any "comical poses."

The court also heard that officers protecting the royals lost more than £250,000 ($365,800) to a spread betting venture called "The Currency Club," one of a number of apparently successful sidelines Page allegedly set up to clear spiraling debts, PA said.

According to the BBC, Page extracted around £3 million ($4.4 million) from some 57 lenders or investors.

Cooper suggested that McGregor had been "one of those police officers" using mobile patrols to deliver cash to other police officers based in Royal Protection who were involved in financial matters.

The accusation was again denied by McGregor.

He instead claimed he had been "totally sucked in" by Page. "I was totally sucked in by Paul he is a very charismatic person," he said, before adding that he had acted "very naively and very stupidly" in some of his dealings with his former colleague.

The prosecution claimed much of the money was promptly laundered by Page's wife before being gambled away, as Page himself hid his dishonesty behind a " veneer of credibility" fueled by a fleet of expensive cars and claims he was a highly "adept" property developer and market speculator, PA said.

Father of five Page, 37, from Essex in south-east England, has denied five charges -- two of fraudulent trading, one of intimidation, threatening to take revenge and making a threat to kill between January 1, 2003 and March 30, 2007.

His wife Laura, 42, denied "being concerned in an arrangement facilitating dealings with criminal property," intimidation and threatening to kill.