(CNN) -- Four men accused of involvement in a foiled terrorist plot against Western targets went on trial Wednesday in Germany. 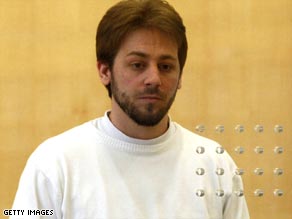 Three of the men -- two Germans and a Turk -- were arrested in September 2007. Authorities said they had begun mixing a huge amount of explosive material that could have resulted in a strong blast, bigger than the attacks in Madrid in 2004 and London in 2005.

The three -- Fritz Gelowicz, Martin Schneider, and Adem Yilmaz -- are charged with membership in foreign and domestic terrorist groups, preparation of explosives, plotting to murder, and plotting to commit a crime using explosives, the court said.

The fourth person, identified in German media reports as Attila Selek, is a German citizen of Turkish descent. The German magazine Der Spiegel said prosecutors are still searching for a fifth man they believe played a central role in the alleged plot.

The trial is taking place at the Higher Regional Court in the northern city of Dusseldorf.

When Gelowicz, Schneider and Yilmaz were arrested, they were found with sophisticated and difficult-to-obtain detonators, authorities with knowledge of the arrests have said.

U.S. interests in Germany were among the targets of the plot, Michael Chertoff, who was the U.S. homeland security secretary, said at the time.

Gelowicz and Schneider are Germans who converted to Islam. Gelowicz was a leading member of a radical Islamist center in Ulm in southern Germany and was well known to German authorities, officials said.

The trial could last up to two years, Der Spiegel reported. The trial's paperwork reportedly fills some 530 folders and the prosecution plans to call 219 witnesses, the magazine said.

A little-known Uzbek militant group, the Islamic Jihad Union, claimed responsibility for the plot days after the arrests. It said the intention was to target both U.S. and Uzbek targets, said German Interior Ministry spokesman Christian Sachs.

German authorities had said the three men trained at the group's camps in northern Pakistan.

The group said it wanted to target the United States' Ramstein Air Base and other U.S. and Uzbek military and diplomatic installations in Germany, Sachs said.

Another of the group's goals, he said, was to force Germany to stop using an air base in Uzbekistan as a stopover point for moving equipment and personnel into and out of northern Afghanistan.

The group is believed to have ties to al Qaeda.

The Islamic Jihad Union was unknown until April 2004, when it conducted a series of suicide bombings in Uzbekistan, killing 47 people, according to the Memorial Institute for the Prevention of Terrorism, a non-profit organization funded by the Department of Homeland Security.

All About Al Qaeda • Ramstein Air Base • Uzbekistan