LONDON, England (CNN) -- A painting by Adolf Hitler sold for almost $15,000 Thursday -- more than six times as much as expected. 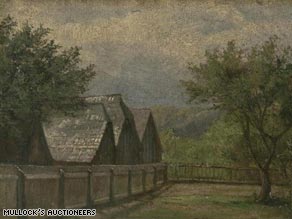 The watercolor was one of 15 items of Hitler art being sold at auction. Together, the artworks by the Nazi leader fetched almost $120,000.

They had expected to raise just under $50,000, auction house Mullock's of Shropshire estimated.

Many of the pictures were on the market because one of the sellers wanted money to install a new central heating system in his house, a spokesman for the auction house said.

Watch the bidding on Hitler's paintings »

"The watercolors came from a collector who is a regular vendor of ours," said Richard Westwood-Brookes, a historical documents expert at Mullock's. "He'd forgotten about them for years. He found them in his garage."

He refused to disclose the identity of the seller, as a matter of policy.

Thirteen watercolors were expected to fetch $580 to $2,200 apiece, while the lone small oil painting was estimated at up to $30,000, the auctioneer estimates.

The remaining watercolor -- a 1910 painting showing a figure sitting on a stone bridge -- fetched almost $15,000. There has been speculation that the figure was a depiction of Hitler himself.

Hitler dreamed of being an artist as a young man, and although he failed to get into the Vienna Academy of Arts, he supported himself by painting watercolors for several years before World War I, according the Holocaust Encyclopedia of the United States Holocaust Memorial Museum.

The auction also includes dozens of items related to Hitler's time as leader of Nazi Germany -- including documents from concentration camps where those deemed "undesirable" by the Nazis were imprisoned, sterilized and murdered. Approximately 6 million Jews were killed in Nazi death camps, alongside millions of political prisoners, homosexuals, Gypsies and others.

"Who would want to have in their house a painting by the most horrible murderer in the history of mankind?" asked Rabbi Marvin Hier, dean of the Simon Wiesenthal Center which aims to fight anti-Semitism. "Any individual that would buy it to hang in their homes should be ashamed of themselves."

Hier said he did not object to Holocaust-related documents being auctioned "if their purpose is to wind up in research institutions," noting his own organization had obtained "important documents" that way.

"It's just as much as part of the Second World War as photographs of (Winston) Churchill," the British prime minister during the war. "It's something that happened and you can't ignore it."

He said he hoped buyers would preserve items such as a teenage girl's registration document for the notorious Auschwitz concentration camp, where approximately 1 million people were murdered.

"The intention is that people will acquire this material and make sure it is preserved for future generations to study," Westwood-Brookes said.

The buyers could be "anybody and everybody," he said.

"There are many, many collectors of Second World War memorabilia all around the world," he added.

"Some people wouldn't want it," he admitted, but some would, "mainly because they want something to do with a famous person in history. In this case it happens to be Hitler, but in another sale it might be Churchill or Gandhi."

"I don't take any moral position" on the sale of Hitler-related artifacts, he said. "You can't say this guy was a bad guy, so I won't sell his memorabilia, this guy was a good guy so I will sell his. If you do that, where do you stop?"

The Hitler paintings came from three sources, Westwood-Brookes said, describing them as "people who had collected them over the years."

"The rest of the stuff has come in from all sorts of sources -- dealers who acquire stuff and sell stuff from other auction houses or private sources, members of the public who find something in the attic, and collectors, who are constantly changing their collections and selling off that bit that they don't want in order to buy stuff that they do."