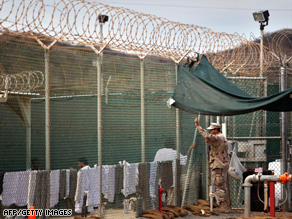 A guard leans on a fence talking to a detainee at Guantanamo earlier this year.

Prosecutors at the court argued last week that the case should be dropped in Spain, but the new judge, investigating magistrate Eloy Velasco, will now have to decide whether to proceed or not, the spokeswoman said.

Velasco's decision could take days or weeks. He must first study the prosecutors' arguments calling for the case to be shelved, and the 98-page complaint filed at the court on behalf of the Association for the Rights of Prisoners.

President Obama has said he opposes prosecuting CIA operatives who may have conducted harsh interrogations at Guantanamo but this week he appeared to leave the open the possibility that those who designed the legal framework for the techniques might come under closer scrutiny in the United States.

Lawyer Gonzalo Boye, who presented the complaint for the prisoners rights group to the court, said he hoped the new judge would proceed with the case.

"After reading all the material, and after all that's been going on in the United States, he should conclude that we're looking at a crime, despite what the Spanish prosecutors say," Boye told CNN.

Spain's attorney general said last week the case threatened to turn the court into a "toy" for people with personal or political agendas. He added that the proper venue, if there were to be such an investigation, would be in the United States.

Feith has described the charges in a Wall Street Journal article as insulting and sloppily drawn. If the case goes forward, he wrote, it would have "harmful implications."

Another National Court judge, Baltasar Garzon, accepted the complaint last month from the human rights group because there were at least four Spaniards at Guantanamo who allegedly suffered torture.

After hearing the prosecutors' opinion to drop the case, Garzon sent the provisional case to a senior judge at the court for it to be assigned to an investigating magistrate.

The court has investigated human rights abuses under former military regimes in Chile, Argentina and Guatemala, with Judge Garzon often taking a leading role and sometimes against the wishes of prosecutors. But Judge Velasco is thought to have little, if any, experience in these kinds of cases, observers said.

All About Spain • Guantanamo Bay