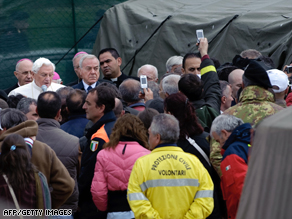 Pope Benedict XVI speaks to quake survivors at a tented camp in the village of Onna.

The pope flew by helicopter from Vatican City to a tent camp near the village of Onna, where he led a prayer in the cold and rainy weather for the hundreds killed in the April 6 quake. .

The camp houses hundreds of families left homeless when the magnitude-6.3 quake destroyed their homes. Residents there welcomed the pope, who kissed and hugged some of the children.

"I have come here personally to this splendid and hurt land of yours, which is living days of great pain and precariousness, to express in the most direct way my kind closeness," the pope told residents. "I've followed the news with apprehension, sharing with you your consternation ... for the dead, along with your anxious worries about how much you've lost in a brief moment.

"I am now here with you and would like to hug each one of you with affection," he said. "The church is all here with me, near your suffering."

The pope then headed to the town of L'Aquila, near the epicenter. He planned to stop in the town's most venerated church, the 13th-century Basilica of Collemaggio, whose dome collapsed in the earthquake.

The basilica is the biggest in the surrounding Abruzzo region and is the burial place for Pope Celestine V, who has been interred there since 1327. Pope Benedict planned to kneel in prayer in front of Celestine's urn, the Vatican said.

The earthquake struck early in the morning, as many people slept. Nearly 300 people were killed and tens of thousands left homeless.

Eight of the victims died in a university dormitory in L'Aquila. The pope went there along with L'Aquila Mayor Massimo Cialente and Archbishop Giuseppe Molinare and thanked the volunteers, rescue workers, and emergency workers who have helped in the wake of the disaster.

"It was especially moving to pray in front of the student house, where not a few young lives were destroyed by the earthquake violence," the pope said. "Going through the city, I have realized further how grave the earthquake consequences have been."

A few hundred people, including many rescue workers, were in the crowd. The local school has been turned into the headquarters of the government's Civil Protection Agency, which is handling the emergency response and reconstruction in the quake zone.

Cialente is living in a camper because his house, damaged by the quake, has not yet been declared safe.

About 14,000 homes have been inspected so far, the mayor said, and 55 percent of them are livable. The remaining homes need some type of reconstruction, from small fixtures to serious reinforcements, while a small percentage must be demolished and rebuilt from scratch, he said.

Among those in the crowd was Tonino Risdonna, a resident of the small village of Tempera, near L'Aquila. Risdonna said he is too scared to return to his house, which was damaged by the quake, and that he won't go back until there have been no earthquakes for at least two or three months.

There have been 4,377 tremors since the April 6 earthquake, the Civil Protection Agency said. Three of them have had a magnitude higher than 5.

Risdonna said he came to see the pope because "it is an emotional experience" that helps him release his "sorrow and tension."

Another man who lost two houses in the nearby town of Paganica and is now living in a tent said he came to hear the pope because he "brings a word of comfort and a message of hope."

Meanwhile, Italian Prime Minister Silvio Berlusconi has said he plans to host a meeting of the G-8 in July at the school, an idea that is drawing mixed reactions in the area.

Risdonna, however, said he likes the idea because "it will put L'Aquila in the spotlight, and this will help uplift spirits and also bring some economic help."

All About Italy • Pope Benedict XVI