LONDON, England (CNN) -- The man convicted in the 1988 bombing of a Pan Am jet over Lockerbie, Scotland, began an appeal of his conviction Tuesday in a Scottish court. 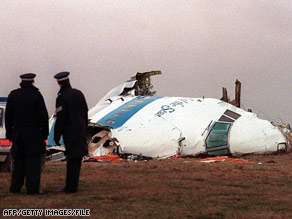 Police officers survey the wreckage of Pan Am Flight 103 in December 1988.

The appeal by Abdelbaset Ali Mohmed Al Megrahi at the Criminal Appeal Court in Edinburgh is expected to last four weeks, a court spokeswoman said.

Megrahi, a Libyan national, was convicted of the Lockerbie bombing in January 2001, but he maintains his innocence and fought for the right to appeal.

After he brought his case before the Scottish Criminal Cases Review Commission, they decided in June 2007 that there were grounds for appeal and recommended the case go back to court.

The appeal starting Tuesday is the result of their decision two years ago.

Megrahi is serving a life sentence at Scotland's Greenock Prison for his role in the December 21, 1988, bombing of Pan Am Flight 103 over the Scottish town of Lockerbie. The bombing killed 270 people, including 11 on the ground.

A Scottish court ruled in 2003 that Megrahi must serve at least 27 years of his sentence before becoming eligible for parole. He was diagnosed with prostate cancer last year and the court heard Tuesday that his health has deteriorated recently.

Megrahi was convicted after the prosecution argued he had placed the bomb, hidden in a suitcase, on a flight from Malta to Frankfurt, Germany. There, prosecutors said, the bomb was transferred onto the Pan Am plane that went first to London's Heathrow Airport en route to New York.

The prosecution maintained Megrahi, who worked at Malta's Luqa Airport, was an agent for the Libyan intelligence services and had been seen buying clothes that were in the suitcase that contained the bomb.

Five judges are hearing the appeal, with Megrahi participating via a closed-circuit television linkup from prison, a court spokeswoman said.

The review commission referred Megrahi's case to the appeal court based on six grounds, the commission said in 2007.

Because of the huge volume of information and evidence related to those six grounds -- which were arrived at after a three-year investigation by the commission -- the judges are hearing only two of the six grounds during the four-week appeal, the court spokeswoman said.

The other four grounds will be heard later, she said.

New evidence uncovered during the commission's investigation and other evidence not submitted at Megrahi's original trial led the commission to believe that Megrahi "may have suffered a miscarriage of justice," Forbes said.

The decision on whether he did suffer a miscarriage of justice is up to the appeal court, said Gerard Sinclair, the commission's chief executive.

While the commission has not outlined all of the six grounds for appeal, it did identify two of them in a June 2007 news release.

The first is a finding by the commission that "there is no reasonable basis" for the trial court's conclusion that Megrahi purchased the clothes in Malta on the day alleged.

Evidence not heard at trial "indicates that the purchase took place at a time when there was no evidence at trial that the applicant (Megrahi) was in Malta," the commission said.

Also not heard at trial, the commission said, was evidence that the owner of the clothes shop had seen Megrahi's picture in a magazine article about Lockerbie days before he picked Megrahi out of a lineup.

At trial, the clothes shop owner, Anthony Gauci, said the purchaser of the clothes resembled Megrahi "a lot."

"In the commission's view, evidence of Mr. Gauci's exposure to this photograph in such close proximity to the [lineup] undermines the reliability of his identification of the applicant at that time and at the trial itself," the commission said.

All About Lockerbie • Moammar Gadhafi • Libya