LONDON, England (CNN) -- Archaeologists excavating a site in East London have made an "extremely rare and unprecedented" find -- a delicately detailed dish made of hundreds of pieces of tiny glass petals, the Museum of London Docklands announced Wednesday. 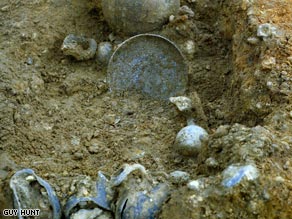 The dish unearthed after about 2,000 years.

The "millefiori" dish (the name means "thousand flowers") was found buried in the grave of a Roman Londoner, the museum said.

Based on the other grave goods found at the site, archaeologists believe the person buried there was wealthy, the museum said.

The dish was highly fragmented when archaeologists unearthed it, the museum said, but it had been held together over the centuries by the earth around it.

A conservator at the museum reassembled the dish, which is now on display at the Museum of London Docklands.

"Piecing together and conserving such a complete artifact offered a rare and thrilling challenge," said conservator Liz Goodman, who did the work.

"We occasionally get tiny fragments of millefiori, but the opportunity to work on a whole artifact of this nature is extraordinary. The dish is extremely fragile but the glasswork is intact and illuminates beautifully nearly two millennia after being crafted."

The glass petals are blue with white borders and are each indented. They were originally embedded in opaque red glass, the museum said, and while the red coloring has diminished across most of the dish, it can still be seen around the edge.

"The complexity of its manufacture indicates that the dish was a highly-prized and valuable item," the museum said in a statement.

Such beautifully crafted vessels were in vogue in the 1st and early 2nd centuries, the museum said. Dating is under way to determine the precise period of the find.

The excavations that uncovered the dish are part of an ongoing dig at the extensive eastern cemetery of Roman London, which was then called Londinium. The site now lies in the neighborhood of Aldgate.

The cemetery -- which, by law, lay outside the city walls -- spanned more than 400 years of Roman occupation from the late 1st to early 5th centuries, the museum said.