(CNN) -- Seven people were killed when a car careered into a crowd of people watching the Dutch royal family riding past in an open-top bus Thursday. 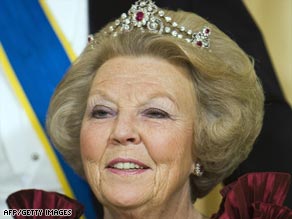 Queen Beatrix began her reign in 1980 after her mother abdicated the throne.

The incident occurred during Queen's Day, a national holiday celebrated every April 30 to mark the queen's birthday. The birthday of Queen Beatrix -- the current monarch -- is actually January 31.

The celebrations are a reflection of how widely popular members of the royal family remain in the country as national figureheads.

They have no political power, but hold a large number of ceremonial duties.

The Netherlands only became a kingdom with its own monarch in the early 19th century.

However, Queen Beatrix descends from the Nassau and Orange dynasties which ruled the area as stewards for six centuries.

The House of Nassau's role dates back to 1403, when Count Engelbrecht I of Nassau married Johanna van Polanen, the lady of Breda.

As they acquired more land, they entered the ranks of the highest nobility and a series of deaths and inheritances saw the German-born Prince William I found the House of Orange Nassau in the mid 16th century.

In 1688 England invited the then Dutch stadtholder (steward), the above William's grandson, William of Orange, whose wife Mary was a Stuart, to rule England.

In 1795 the last Dutch stadtholder, Prince Willem V, was forced to flee to England when the French invaded.

The area remained part of the French Republic, and later Napoleonic Empire, until 1815, when Prince Willem V's son established the Netherlands, becoming King Willem I.

His grandson, William III, was the kingdom's last male ruler.

When he died in 1890, his wife, Emma, became regent for nine years, until their daughter Wilhelmina was old enough to accede to the throne.

However, as has become the norm with Dutch monarchs, she abdicated in 1948 to allow her daughter, Juliana, to take the throne.

Queen Juliana would famously dress in casual clothes and ride her bike to visit friends.

She reigned until 1980, when she abdicated to allow Beatrix to begin her reign.

Queen Beatrix, now 71, married the German diplomat Claus von Amsberg, a source of protests at the time as he had served in the German Wehrmacht during World War II, in 1966 and they had three sons: Willem-Alexander (born 1967), Friso (born 1968) and Constantijn (born 1969).

Prince Claus became a very popular figure before passing away on October 6 in 2002.

Queen Beatrix has indicated that she won't be abdicating in the near future, as she wants Crown Prince Willem-Alexander and his wife, Princess Maxima, to spend time with their family.