CALAIS, France (CNN) -- CNN producer Jessica Hartogs traveled to France to help prepare a television news piece on the immigration situation in Calais. Below is her impression of what she saw. 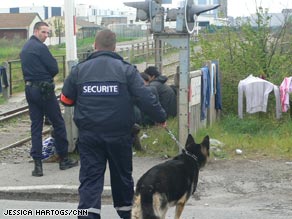 French police conduct frequent checks on the migrants around Calais.

The men sat and stared into the distance on the outskirts of Calais as the French police talked into their walkie-talkies. They were apparently checking the illegal migrants' IDs, but how do you identify men with no papers?

This is a daily occurrence - the illegal migrants are stopped, searched, sometimes photographed or fingerprinted, detained for a few hours and released.

There are more than 2,000 of them living in desperate conditions around Calais -- up to 700 live in the woods near where the trucks destined for Britain drive en route to the ferry terminal.

As we drove through the woods we saw several men run from the bush and try to open the back of a truck as it slowed to take a corner. It's 2 p.m. and more and more attempts are made, the traffickers brazen in their efforts to get the men into or on the trucks by utilizing every possible nook and cranny.

In 2002 the French government closed Calais's controversial Sangatte detention center, which led the migrants to set up the notorious camp dubbed The Jungle in the dunes near the city.

Last year a British student journalist was allegedly gang raped by migrants in the area, and we were warned against visiting.

However, we first go to a meal hosted for the migrants by the charity, Salaam.

It is quickly apparent how segregated the migrants are. The most obvious divide is between the East Africans and the Afghans, but there is also friction between the different tribes and clans represented from Africa, Afghanistan, Iraq, Iran and Pakistan.

Watch more on the migrants in Calais »

The men, however, are open with their stories. Some say they fled Afghanistan after fighting in the army and fearing retribution from the Taliban. Others have been sent to Europe simply because they are the eldest son. A final group plans to send the large sums of money they will earn in Britain back to their families.

Salaam aid worker Michel Falhault promises to take us to The Jungle the next day. He tells us to bring tea, sugar and cigarettes.

When we meet outside The Jungle he warns that if we're not well received, we'll quickly and quietly turn around - the migrants are suspicious of journalists after some entered the camps undercover.

As soon as we enter Michel is nearly wrestled to the ground for the toilet paper, bottled water and candles he is distributing. This quickly passes, though, and we are welcomed.

There are nearly 400 men living here in makeshift plastic tents, with a mosque (also made out of plastic) in the middle of the camp.

There is no running water, no place to shower; skin diseases and dysentery are rife. I could not believe I was still in France.

The men sleep up to seven to a tent and cook rice around small fires.

We hear more stories of endless journeys from Afghanistan and Pakistan. Many have traveled only at night, working in various countries to pay for their journey. They've been pepper-sprayed by police, ripped off and threatened by the traffickers and often do not know which countries they were in before arriving in France.

The French government has promised to bulldoze The Jungle by the end of this year, a threat which only appears to heighten the migrants' dangerous efforts to cross the Channel.

At a truck rest stop we saw migrants laying planks of wood between the wheels of rigs to stow themselves away. Other men lined up along the highway hoping the trucks would slow down long enough for them to jump on.

Calais' residents and the migrants agree that the situation needs to change, but none think bulldozing the tents will make the problem go away.