(CNN) -- The death toll from the suspected attack on the Dutch royal family has continued to rise as more details emerged about the man who slammed his car into a crowd during a holiday parade. 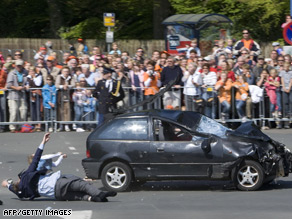 The Dutch defence ministry announced late Friday that a military policeman, 55-year-old Roel Nijenhuis, had died in hospital -- bringing the death toll to seven, including the suspected attacker. Twelve people were also injured in the attack.

The driver, who has not been officially identified, died in hospital in the early hours of Friday from head injuries, as it was revealed that he had lost his job as a security guard and was about to lose his home.

"Recently, he informed me that he had been dismissed and could no longer pay the rent," landlord Sem Bosman told De Telegraaf newspaper. "He was due to have come today to transfer the keys to a new tenant."

The 38-year-old was described by his former landlord and neighbours as quiet, solitary, friendly, soft-spoken and a "dark horse," according to AFP news agency.

The man, whose name was not released, had been seriously injured in the crash Thursday in the town of Apeldoorn, about 70 kilometers (45 miles) east of Amsterdam, police said. He had been charged with trying to attack the royal family, authorities said. Were you there? Send us your video, images

Crowds had lined the streets to see Queen Beatrix and her family ride by in an open-top bus during the Netherlands' annual holiday of Queen's Day.

As the bus moved along, a small black car zoomed past it. The crowds were behind barriers off the road, but security officials and journalists, including many cameramen, were in the road as the Suzuki car went by.

"Queen's Day will never be the same," the Trouw newspaper said. "The Netherlands always has been proud of their no nonsense royal family. With this comes a queen who not only cycles a bike, but also mixes with people without obvious security measurements. Is that still possible now the royal family has been the target of an attack?"