Georgia foils mutiny at military base ahead of training activities 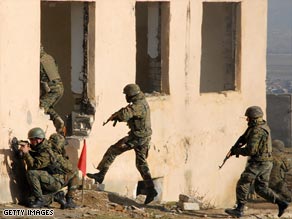 Georgian troops take part in military exercises in January. They are to participate in NATO maneuvers this week.

About 500 troops at a military base outside the capital, Tbilisi, were involved in the rebellion, said Interior Ministry spokesman Shota Utiashvili. He said it was quickly brought under control, and the government reported a few hours later that the base was calm.

Initial investigations suggest that Russia, Georgia's northern neighbor and former ruler, may have had a hand in the mutiny, Utiashvili said.

Russia denied involvement in the incident.

"Tbilisi has pulled yet another anti-Russian prank. ... This is not the first time we are so vocally blamed for interfering. It is typical that each time the charges become more ridiculous," the Russian Foreign Ministry said in a statement.

Utiashvili claimed that Georgia had secret recordings of the mutineers saying they had "full Russian support."

"We know Russia is against the planned NATO exercises in Georgia. We know they have increased the troops at the border. We don't have 100 percent evidence right now, because the investigation is ongoing," he said.

But, he added, until the investigation is complete, officials won't point a finger at Russia.

Russia and Georgia fought a five-day war in August over the breakaway Georgian province of South Ossetia, the first time Russia sent troops abroad in anger since the fall of the Soviet Union in 1991.

NATO is expected to launch month-long military exercises this week in Georgia. The move has angered Russia, which accused the alliance of "muscle-flexing."

"All kinds of things have been said," the Russian Foreign Ministry said. "But it has never before been claimed that Russia is trying to overthrow the Georgian government with the help of the Georgian armed forces. In this regard, we once again reiterate that Russia does not interfere in the internal affairs of Georgia on principle. We do not believe in scripts imposed from the outside."

NATO said it had no comment on the incident because it did not independently confirm the event. However, a NATO spokeswoman in Brussels said Tuesday that exercises planned for Wednesday are "still on" and that "nothing has changed" after the attempted mutiny.

"The timing chosen by Tbilisi for its latest action is telling: the day before the start of NATO exercises in Georgia," the Russian Foreign Ministry said. "We strongly warned our partners that the exercises were absolutely inappropriate in the current highly charged atmosphere within Georgia and the region. Our warnings were not heeded."

Georgia's Utiashvili said the rebelling soldiers were heard saying they were "unhappy with the political situation in the country."

One person was arrested, and authorities are looking for another in connection with the attempted mutiny, Georgia's Ministry of Internal Affairs said.

The person in custody, Gia Ghvaladze, served as a major in the Special Forces Department at the now-disbanded Ministry of State Security, Georgian officials said. He is being held on charges of organizing a military mutiny.

In an undercover tape released by Georgian officials, a man is heard saying, "Russians will come. About 5,000 men, two battalions. Can you imagine? Five thousand men. Do you know how big this is?"

CNN could not confirm the authenticity of the tape, but the Georgian government said it implicates Ghvaladze.

Authorities said they are looking for the second man, Koba Otanadze, who is wanted for his role in organizing the mutiny. Otanadze helped lead a military mutiny at the same base in May 2001, the Ministry of Internal Affairs said.

A third person -- Zaza Mushkudiani, the head of the Georgian ranger battalion -- was also being investigated, the ministry said, but it was unclear whether he was in custody.

NATO is expected to launch month-long military exercises this week in Georgia. The move has angered Russia, Georgia's neighbor to the north, which accused the alliance of "muscle-flexing."

Russian Foreign Minister Sergei Lavrov postponed his trip to Brussels, Belgium, for the ministerial meeting of the NATO-Russia Council because of the planned NATO exercises, Lavrov told the Itar-Tass news agency.

In April, Saakashvili vowed to remain in office until his term ends, defying calls by anti-government protesters that he step down.

Up to 60,000 demonstrators took to the streets, blaming the president for leading the country with Russia and plunging it into a political crisis. They also were angry about rising poverty in the country.

CNN's Matthew Chance and Nunu Japaridze contributed to this report.

All About NATO • Republic of Georgia • Mikheil Saakashvili • Russia