(CNN) -- A Belgian city has decided to go "veggie" for a day in an effort to highlight the environmental and health costs of eating meat. 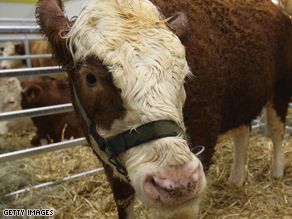 The city authorities in Ghent, some 50 kilometers (30 miles) west of Brussels, have declared Thursdays "Veggie Day," (Veggiedag) and are asking residents to get involved and opt for vegetarian meals at least one day a week.

It says Ghent is the first city in Europe to try such a scheme.

According to the city's campaign publicity, eating less meat can help to minimize the ecological footprint of your food because stock breeding has a detrimental impact on the environment.

It points to data from the United Nations which says livestock is responsible for generating around 18 percent of the world's greenhouse gas emissions.

It is also hoped that Veggie Day will have a positive health impact in the fight against diet-related illnesses such as obesity, cancer and diabetes.

On Wednesday organizers provided residents with meat-free recipes and a list of vegetarian restaurants at a "launch party" in the center of the city. Ghent claims to have more vegetarian eateries per inhabitant than Paris, London and Berlin.

Demonstrations were also on offer to people looking for green cooking tips.

All About United Nations