Arrests at Moscow gay parade ahead of Eurovision Song Contest 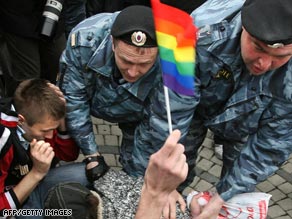 Gay and lesbian rights activists are detained in Moscow Saturday ahead of a planned march.

The arrests included Nikolai Alexeyev, a prominent gay activist in Russia, and his associate Nikolai Bayev, Interfax said, adding that more people trickling into the location were being arrested without explanation.

The arrests came ahead of Saturday night's Eurovision Song Contest, which is being held in Moscow. The contest has a strong following among the gay and lesbian community.

Watch police break up the march »

Journalists from various countries gathered at the scene, as police barricaded the park with metal bars. Trucks with soldiers onboard were parked on nearby streets, Interfax said.

UK gay human rights campaigner Peter Tatchell, in a statement on his Web site ahead of the march, said it was being held to coincide with the final of the Eurovision Song Contest.

"This parade is in defense of human rights. We are defending the often violated human rights of lesbian, gay, bisexual and transgender Russians. They want legal protection against discrimination and hate crimes. I support their cause.

"Not all Russians are homophobic, but many are. Gay Russians suffer queer-bashing attacks, blackmail, verbal abuse and discrimination in education, housing and employment. This shames the great Russian nation."

The Eurovision Song Contest, which began in 1956, sees singers and groups from a short list of European nations perform a specially written song before telephone votes from each nation decide the winner.

In western Europe, the contest is regard as a light entertainment spectacular, with a strong following among the gay and lesbian community. Many fans dress up, hold parties and gather round the TV to watch the three-hour-plus televised marathon.

In recent years, however, eastern European nations, which take the contest much more seriously, have come to dominate.

The organizers of the contest estimate it is watched by 100 million people worldwide.