LONDON, England (CNN) -- The most telling reaction I have encountered in the row over excessive expenses claims by British lawmakers came from a London taxi-driver. "I am sick and tired" he said "of hearing them excuse themselves by saying that what they did was OK because it was within the rules. Whatever the rules said, didn't they ever stop to ask themselves if what they were doing was right?" 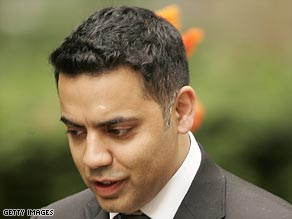 Now of course it is payback time. It is payback time in the sense that a number of parliamentarians have volunteered payments back into the taxpayers' purse in a bid to purchase absolution, like medieval Christians buying 'pardons'. (But that, incidentally, doesn't seem to be impressing many voters, who tend to scoff: "If I had cheated on my taxes or stolen cheese biscuits from the supermarket I'm not going to be let off just because I offer to give back what I took").

It is also payback time in the sense that the public feel they have been cheated by many of their elected representatives and they want the guilty to suffer and to be seen to suffer. Watch more on voters' anger

When the hapless Shahid Malik, the justice minister forced to quit his post after we learned not just about the home cinema system and the $1,000 massage chair the taxpayer unwittingly bought him but also about his seemingly questionable housing arrangements, went on the airwaves to proclaim: "I think this is a bit of a non-story, to be honest" it simply demonstrated the gulf between the legislators in their Westminster cocoon and the people they are supposed to represent. What do you think about the expense scandal?

The anger is deep and it is genuine. All normal political intercourse has been pushed into the background. MPs are mocked and derided on the BBC's Question Time or at the Police Federation conference simply because of their profession. Bricks are thrown through the windows of constituency offices. Radio phone-ins and newspaper letter pages are dominated by the issue. And those who are angry want more than a change of rules and a new expenses culture at Westminster. They are looking for retribution against those who have shamelessly manipulated a corrupt and hopelessly policed system.

So how are the miscreants to be punished? The first thing that has to be said is that there are some perfectly legitimate expenses which MPs, particularly those living far from the capital, should be allowed to claim. Nor should all MPs be lumped together from the outset in the guilty pen. There are plenty who have not been enriching themselves at public expense and if the Daily Telegraph, which bought and has published the information which has so shocked the British public, has any sense of fairness it will at some stage publish a list of the clean ones to balance the muck it has been raking through.

So far on the Conservative side a few senior figures have been forced by their leader David Cameron to repay excessive expenses claims. His leading aide Andrew Mackay has been forced to resign after he and his wife Julie Kirkbride, also a Conservative lawmaker, admitted they had each claimed for separate second homes for eight or nine years.

Malik, who claimed the maximum $100,000 over three years for his London second home while renting a constituency home for just $150 a week, has resigned while his affairs are investigated, but at the moment he has not been replaced. Two Labour MPs, Elliott Morley and David Chaytor, who have admitted continuing to claim interest on mortgages which had already been paid off have been suspended from the party and would be unable to stand for Labour at the next General Election if they stay suspended. But voters are going to want more than that.

Watch more on the scandal »

A week into the rumpus the Metropolitan Police Commission and the Crown Prosecution Service have announced that they will convene a panel of lawyers and policemen to see if they should mount investigations which might lead to prosecutions. But people clearly want more than a convention of potential wrist slappers. There is a difference between manipulating a cozy system and downright dishonesty. Where fraud has been perpetrated prosecutions must follow. If the law does not do better than waffle on this, if there is seen to be one standard for lawmakers and another for the rest of us, then legal institutions will fall into as much disrepute as parliament now finds itself in.

Many now want the reforms of parliament to go further than cleaning up the expenses system. Does Britain really need as many as 645 MPs at Westminster, many are asking, especially now there is a Scottish Parliament and a Welsh Assembly too?

The next crucial stage, the one we are entering now, is that of MPs having to explain themselves to their constituents on their expenses claims. There is only one way of clearing the air: these meetings should be held in public and with the media present.

Political activists want miscreants forced to explain themselves and to be re-vetted by their local parties before they are allowed to stand for election again. Any party which wants to win the trust of the electors at the general election next year will need to know that the man or woman being put forward has no expenses skeletons in the cupboard and after the scale of the convulsion that have seized Westminster over the past 10 days all previous bets -- and selections -- should be off .

There are signs that Labour's national executive will shortly pronounce that any MPs found guilty of making improper claims will be de-selected -- that is, they will lose the party's backing as an official candidate. If parliament is ever to regain public respect then all parties must surely offer the same assurance.

Finally it is just as well that the Speaker who has presided over MPs' efforts to keep a blanket over their dippings into the public purse has let it be known in the last few days that he will stand down before the next election. He had to. In 40 years reporting the place I have never known such public derision for parliament and its doings. The expenses crisis, which will drive down turnout and boost some dangerous minority parties, amounts to a genuine threat to democracy. The very least that is needed is a new figurehead to set a different tone.