LONDON, England (CNN) -- Michael Martin, forced to resign as Speaker of the British parliament, has become the highest profile victim of the expenses scandal which has dominated public life in Britain now for nearly two weeks. 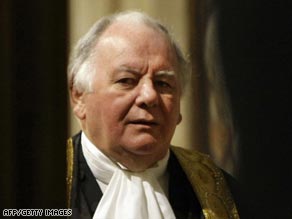 Michael Martin has resigned after MPs called for his head following the expenses scandal.

Martin has suffered because as Speaker he not only chaired debates in the Commons chamber but was in effect parliament's chief executive. In that role he was responsible for the Fees Office.

The poor policing by that office of the expenses system has led to public outrage, with MPs claiming interest payments on mortgages they had paid off, husband and wife teams claiming for separate second homes and many MPs lavishly outfitting their second homes under the additional costs allowance to the tune of up to $36,000 a year -- in some cases before selling them at a handsome profit.

Speaker Martin has been forced out also because he was, in the words of Liberal Democrat Leader Nick Clegg, "a dogged defender of the status quo," resistant to reform. His attempts to keep the details of MPs expenses from the public's gaze, contesting the provisions of Freedom of Information legislation, also made him a target for the media.

There had been questions too about his wife's $6,000 bill for taxis used on shopping trips.

Watch how the rules have led to abuse »

Martin's fate was sealed by an abject performance in the House of Commons Monday when a number of MPs sought a debate on a motion of no confidence in the Speaker and told him to his face that he must go.

A fumbling, badly-read apology from the Speaker to the British public was not enough. It was clear, in the words of one MPs, that "he simply didn't get it." A hint that he would stand down at the general election due next year might have saved him. Instead he hid behind procedural niceties and said that it was not appropriate to debate his future. What do you think about the expense scandal?

As MPs called angrily for his head and he sought guidance from officials, it was clear that he had lost the confidence of the Commons and had to go.

Already the expenses row has forced the resignation of a Labour Justice Minister, Shahid Malik, over housing claims, and two Labour lawmakers have been suspended from party membership.

The Conservative Opposition leader David Cameron was forced to order eight members of his Shadow Cabinet to get out their check books and pay back the taxpayer for excessive expenses claims. He also suffered the resignation of a top aide, Andrew Mackay, after he admitted he and his wife Julie Kirkbride, also a Conservative member, had for nine years claimed second home allowances on two separate premises.

So does the continuing expenses furor, fueled by a flood of detailed reports in the Daily Telegraph, which obtained details of the correspondence between MPs and the Fees Office over their claims, mean that Britain now has a corrupt political establishment and that the 'Mother of Parliaments,' as it was once proudly termed, should now be compared with the legislators of tin pot dictatorships across the globe? We are not there yet.

What has happened is that British MPs and governments, fearful of facing the likely public outcry if they sought bigger salaries to compete with figures in industry, built themselves a lucrative and poorly supervised system of expenses which allowed them to top up their salaries by other means.

Not all MPs did it, but for many an 'expenses culture' grew, seemingly encouraged by officials. The claims made by most MPs, even for excavating moats at grand country homes, repairing swimming pools and trimming hedges around helipads, were technically within the rules but a million miles away from the spirit in which they should have been interpreted.

No one with experience of the United Nations or the European Parliament would be unfamiliar with the kind of enterprises which developed. But in Britain they have been exposed to public gaze at a time when others are suffering the ravages of recession and the anger is intense.

The whole political class is currently being held in disrepute, and fringe parties are likely to benefit at the expenses of the mainstream in forthcoming elections.

The stables have to be cleaned, and the dumping of an unpopular and clumsy Speaker is the first step in that. Now the parties are conducting their own inquiries and insisting that MPs found to have behaved dishonestly will not be allowed to stand again.

Reforms are now being frantically sought. They are likely to include a "cap" on mortgage payments, a ban on the practice of "flipping" (naming different properties in turn as the second home in order to claim allowances on them) and an independent body to vet MPs' expenses.

The Speaker's resignation is not therefore the culmination of the affair, merely the beginning of a necessary clear out in British politics, weeding out the' parasites' as one Conservative lawmaker called them from the rest.