(CNN) -- Thousands of children suffered sexual abuse, beatings, malnutrition and emotional abuse for decades in the Irish institutions where they were raised, an Irish government commission said Wednesday. 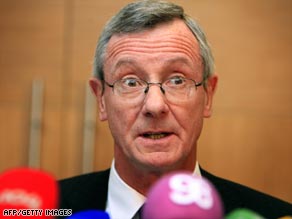 Sean Ryan, chairman of the commission appointed by the Irish government, announces his findings Wednesday.

Catholic clergy ran the vast majority of the reformatories and orphanages where the abuse allegedly took place, it said.

There were institutions where sexual abuse was a "chronic problem" and where "floggings" that "should not have been tolerated in any institution" were "inflicted for even minor transgressions," the commission's wide-ranging report says.

The report details the case of one "serial sexual and physical abuser" who "physically terrorized and sexually abused children in his classroom" in six schools over a period of 40 years -- and was "persistently protected" by church and educational authorities. The man, identified only by a pseudonym, was finally convicted of sexual abuse in the 1980s, the report says.

Adults were not the only ones inflicting abuse, the report charges -- in some schools older boys harmed younger ones.

Children with special needs were among the victims, the report says.

The Irish Catholic Bishops' Conference declined to comment on the report. The report will not lead to prosecutions, which has prompted anger from some people who say they were victims of abuse.

The five-volume report is the result of a nine-year inquiry into allegations of child abuse at the institutions from 1936 to the present. Most testimony focused on the years between 1936 and 1970.

The institutions included reformatories, hospitals, orphanages, children's homes and industrial schools. Industrial schools were homes to orphans, children accused of petty crimes and teenage mothers, and existed in Ireland until the 1980s.

Tens of thousands of Irish youngsters went through these institutions, with some of them later saying they suffered horrible abuse. The issue was known in Ireland for decades but little was said publicly because many of the schools were linked to religious orders through the Roman Catholic Church.

The report concluded that sexual abuse of boys at one of the Christian Brothers' schools, in Artane, was a "chronic problem."

"Complaints were not handled properly and the steps taken by the congregation to avoid scandal and publicity protected perpetrators of abuse," the report says. "The safety of children was not a priority at any time during the relevant period."

Another of the order's schools, in Letterfrack, was an "inhospitable, bleak, isolated institution" where sexual abuse also was a chronic problem, the report says.

Watch how commission has reported on abuse »

"Physical punishment was severe, excessive and pervasive and, by being administered in public or within earshot of other children, it was used as a means of engendering fear and ensuring control," the report said.

The Department of Education comes under harsh criticism in the report, which calls the government agency "deferential and submissive" toward the religious orders that ran the institutions. Its inspection system "was fundamentally flawed and incapable of being effective."

Police and parish priests, the Department of Education and the schools themselves fielded complaints about the abuse, with mixed results, the report says.

That prompted then-Prime Minister Bertie Ahern to issue a formal apology on behalf of the state to victims of child abuse. Soon afterward, he established the commission.

While the report may be a catharsis for many victims of abuse, it has come under criticism because the commission is not allowed to "name and shame" perpetrators.

The names of the schools and institutions may be made public -- and many of them are already well known -- but names of alleged abusers will be kept secret unless they have already been convicted.

"It is very important that the full extent of the horrendous abuse experienced by thousands of young people for over half a century in institutions and at the hands of religious orders in Ireland is exposed," said Melanie Verwoerd, executive director of the United Nations Children's Fund Ireland.

"The extent and systematic nature of the abuse is indicated as far more widespread than even previously thought," she said. "The publishing of the report is not only to be welcomed, but also represents a brave and courageous attitude on behalf of the Irish government to face up to the extent of these crimes against children."

The commission was ordered to inquire into allegations of abuse in institutions and to determine the nature, causes, circumstances and extent of the abuse. It also looked at the role of the institutions and their supervision.

The total cost of the investigation was €60.8 million ($83.7 million), the commission announced Wednesday.

All About Bertie Ahern • The Roman Catholic Church