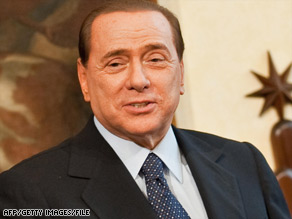 Italian Prime Minister Silvio Berlusconi said it was too soon to tell how many detainees his country may accept.

In an interview with CNN, Berlusconi said Italy is prepared to help the United States deal with terrorism by allowing Guantanamo detainees to be relocated there.

"If we can do this favor for the American people and the U.S. government, we will certainly do it," he said.

Asked how many detainees Italy might take, he said it was too soon to say.

"We feel that we should do everything possible to support the United States, and we can't expect them to fight for all of us single-handedly," Berlusconi said. "Terrorism is a phenomenon that affects us all."

His statement is likely welcome news for President Obama, whose plan to close the Guantanamo facility by January 2010 has come under criticism from Democrats and Republicans, who fear the possible relocation of suspected terrorists to U.S. soil.

Obama has insisted the Guantanamo facility can be closed and detainees relocated without endangering U.S. national security.