ISTANBUL, Turkey (CNN) -- From the south-eastern edge of Europe, Turkish government officials expressed concern about the gains by right-wing parties in the European Parliament elections. 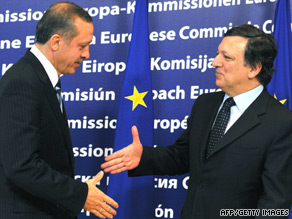 "The tendency in Europe towards the extreme right is worrisome," said Murat Mercan, the chairman of the foreign relations committee in the Turkish parliament and a top-ranking member of the ruling Justice and Development Party.

The leader of Sarkozy's Union for a Popular Movement [UMP], Xavier Bertrand, declared that the party's candidates for the European Parliament had signed written promises that, if elected, they would reject Turkey's EU bid. The UMP saw significant gains in this month's elections.

Meanwhile, Geert Wilders, the leader of the Netherland's far-right Party for Freedom, which also won seats in the vote, was quoted last week saying Turkey would not join the European Union, "not in 10 years, not in a million years" because it was a Muslim country.

Reaction in the Turkish press was fairly muted on Monday, though the Milli Gazete newspaper declared that "Nazis came out of the elections in Europe."

On Saturday, the religious conservative Zaman newspaper wrote: "Turkey-EU relations will be affected negatively in the case of rightist and racist parties strengthening in the EP. There are fears that racist parties who have common animosity against Turkey can reach numbers enough to form a group in the parliament."

According to a recent poll published by Istanbul's Bahcesehir University, 57 percent of Turks surveyed said they still supported Turkish membership in the EU.