LONDON, England (CNN) -- Voters endorsed fringe parties and those of the center right in elections for the 736 seats of the European Parliament in the midst of a record low turnout, officials figures showed on Monday. 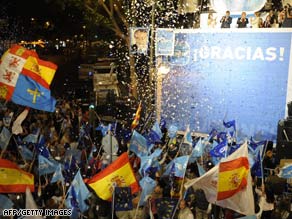 Only 43 percent of the 375 million people eligible to vote in 27 countries visited the polls, according to European Parliament figures, continuing a fall in interest since elections for MEPs were first held 30 years ago.

In the United Kingdom Prime Minister Gordon Brown's political survival hung in the balance as his ruling Labor Party suffered a devastating rout, being beaten into third place by the Conservatives and anti-Europe UK Independence Party (UKIP). The far-right, anti-immigrant British National Party also gained its first European seats, capturing a total of 2.

The extent of the defeat for Labor could prompt rebels to launch a leadership challenge against the unpopular Brown. With most results from across the UK in, Labor had managed just 11 seats to UKIP's 13.

The Conservatives took 24, the Liberal Democrats 10, the Green Party 2 and the Welsh nationalist Plaid Cymru 1.Political contributor Robin Oakley told CNN the results were a devastating blow for Labour and would pile the pressure on Brown as he attempted to face down disaffected members of the parliamentary party on Monday night.

Watch as attacks on Brown mount »

In Germany the political party of German Chancellor Angela Merkel, the Christian Democrats, picked up 31 percent of the German vote, defeating the rival Social Democrats party, according to early returns posted on the EU Web site.

French President Nicolas Sarkozy's party, Union for a Popular Movement, got 28 percent of the French vote, fending off the Socialists Party, which brought in 16.8 percent, the EU reported.

And Italians ignored scandal, divorce action and an investigation into misuse of state resources, giving Berlusconi's ruling center-right party 35 percent of the vote. At 66 percent, turnout was 23 percent higher than the EU average and the highest in the bloc.

A Swedish political party which wants to legalize file-sharing on the Internet scored a surprise victory Sunday when it took a seat in the European parliament.

Brussels had enlisted MTV, the cable television channel, to try to boost turnout after only 40 percent of voters under age 25 cast ballots in 2004. Turnout among all voters was 48 percent that year, the European Union said.

Each country in the union set its own voting timetable with most going to the polls Sunday.

Voters from Bulgaria and Romania, which joined the European Union in 2007, participated for the first time.

In Spain, the main opposition conservative Popular Party won 42 percent of the vote and 23 seats, ahead of the ruling Socialists with 38.5 percent and 21 seats, according to the government's official tally. Six other seats will go to smaller parties.

Sunday's election, seen as a litmus test for conservative Prime Minister Kostas Karamanlis, came at a time of political and economic uncertainty with the economy shrinking and the country staring at a recession after nearly 15 years of high-profile growth.

The powers of the European Parliament -- the European Union's main legislative assembly -- have increased significantly since it was established in 1979, with the parliament often shaping legislation, which is passed down to national parliaments for ratification at member state level.

But there were fears that this year's contest could be hijacked by extremist parties taking advantage of low turnout across member states.

A "Euro barometer" poll conducted last month found that only a third of potential voters intended to cast ballots.

In a statement issued Thursday, European Parliament President Hans-Gert Pottering of Germany urged citizens to use their vote to "support those parties that are in favor of European integration and that are committed to our European values."

"The elections to the European Parliament are of a greatest importance. They are a great occasion to re-launch the European Union and to address the issues that are important to citizens such as the economic crisis, unemployment, climate change, energy security, globalization or immigration," Pottering said.