LONDON, England (CNN) -- In just six months' time, the world will be watching as several thousand delegates descend on Copenhagen for the most important climate change talks since the Kyoto Protocol was adopted in Japan in 1997. 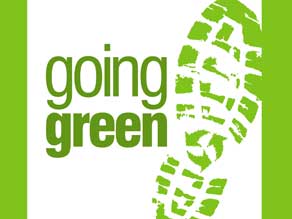 Much is at stake. What is agreed at the United Nations Framework Conference on Climate Change starting December 7 will determine how far individual countries are prepared to go to curtail their carbon emissions when the Kyoto agreement expires at the end of 2012.

Industrialized countries are being asked to give firm numbers for measurable reductions. And then there's the question of developing countries. What are they prepared to do to combat climate change? How much is the developed world willing to help them? How will new technologies and adaptation be financed?

On June 15, CNN launched an online special, "Going Green," to examine the issues and efforts by countries, businesses and individuals to lower the world's collective carbon emissions.

Every day from the week of July 6, special reports will appear on CNN International, culminating in a half-hour special "Going Green: Green Light for Business" which airs from July 9 (see below for show times).

Presented by CNN anchors Fionnuala Sweeney, Kristie Lu Stout and Brooke Baldwin from Paris, Hong Kong and California, the program examines how businesses are balancing their environmental responsibilities with the need for profit.

CNN's journalists travel across the globe to meet with CEOs, city leaders and environmental entrepreneurs. We go behind the scenes at a major Hollywood studio, run through Russia's plans for the Winter Olympics, see Sweden's designs for ending the use of fossil fuels, get a never-before-seen look at the eco-friendly engines that drive Google and see why Paris may be repositioning itself as the "City of 'Green' Lights" for those who want to promote business and protect the planet.