By Sarah Harvey
for CNN

She told stories, flirted outrageously with boys and was constantly changing her hairstyle. 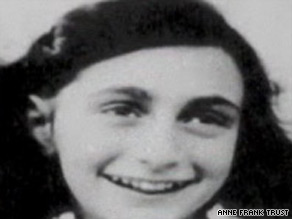 Anne Frank hid with her family in a secret room at her father Otto Frank's office in Amsterdam.

It could be the description of almost any young girl growing up in Europe. But this is how Eva Schloss remembers her childhood friend Anne Frank, who had she not died in a Nazi concentration camp, would have celebrated her 80th birthday this week.

Schloss described Frank, whose account of hiding from Jewish persecution in Nazi-occupied Amsterdam is one of the world's mostly widely-read books, as a spunky young schoolgirl with a passion for storytelling that often got her into trouble.

"She got her diary in 1942, so obviously her father knew she was interested in writing and I know she told stories," said Schloss.

"She talked a lot and she was called Mrs Quack Quack. Very often she used to write hundreds of lines [at school] of 'I'm not going to talk so much,' and so on -- but obviously she had a lot to tell."

In some ways the two friends lived parallel lives -- but tragically they had very different outcomes.

Schloss and Frank both came from Jewish families who fled to Holland to escape the wave of anti-Semitism spreading across Europe as the Nazis rose to power in Germany ahead of the Second World War.

But while Schloss was more of an introvert, Frank loved the limelight. Schloss said: "I was actually quite shy and she was the center of attention. We had steps where we sat, and she had a crowd of children around her.

"She was a big flirt -- she loved boys. She was always showing us who was her boyfriend at that particular time. She was always interested in her clothes. Her style, she always changed it. Sometimes she had curls, then she had straight hair."

Schloss says they were unaware of the full scale of what was going on around them as war escalated across Europe, placing their lives in increasing jeopardy.

"Our parents really protected us so there was no talk about the horrendous things which happened.

"You couldn't go out anymore after 8 o'clock, but for a 11 to 12 year old it didn't matter so much. Or not going to the cinema -- we were upset about those little things which we couldn't do, but we really didn't really take it seriously at that time."

Like Frank, Schloss was also forced into hiding when the Nazis took control of Holland.

Frank hid with her family in a secret room at her father Otto Frank's office. But Schloss and her family had to split up. Schloss stayed with her mother while her father and brother hid elsewhere. She and her mother moved around, staying in seven different hiding places over a two-year period.

Eventually both families were betrayed and were sent to concentration camps, where Frank died at the age of 15.

Schloss said: "My father and brother were betrayed by a Dutch nurse who was a double agent, and all four of us were arrested and taken to the headquarters to be interrogated.

"I didn't know anything, which was a good thing. So eventually they realized this and they gave up torturing me. Within two days we were put on a transport to Auschwitz."

Of her family, only Schloss and her mother survived Auschwitz, one of the most notorious concentration camps, located in southern Poland.

Today Schloss, who has just celebrated her own 80th birthday, has a husband, three daughters and five grandchildren.

Schloss says it took her decades to rebuild her life, with the help of Frank's father Otto, who also survived incarceration in a concentration camp.

She met Otto in August 1945, when he showed her Frank's diary.

Schloss said: "He read a few passages but he always burst into tears. It took me 20 years. I was really unhappy, but it was Otto who came to our apartment to talk to us, and he helped me a lot. He had lost everybody.

"Her book, she [Frank] made people aware of what happened. There are many messages. She believed in the goodness of mankind.

"People always ask me, what she would have done. I guess we will never know. But I guess she would have gone into politics -- she was a fighter. It's a pity, but also -- maybe her diary would have never been published."

All About Auschwitz-Birkenau • Anne Frank