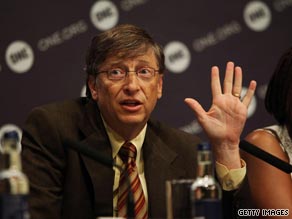 The report said that Italy, host to the next G8 summit, has "performed especially poorly" in its share of aid spending and that France has fallen behind on its commitment.

In an interview with CNN's Richard Quest, Gates said nations such as France had not been able to fulfill their promises due to pressures on budgets and suggested they needed to "raise the priority so the promises are met." Are G8 nations doing enough during the recession to help developing economies?

The former Microsoft chief set up the philanthropic Bill & Melinda Gates Foundation in 1994. Part of its remit is to help nations trapped by hunger and extreme poverty, donating billions of dollars on health aid during the past two decades.

Gates said that as industrialized nations cut their budgets over the next few years to get deficits down there would be a real question of whether aid money will be untouched or increase.

But if people knew how valuable such aid was, he said, the pressure on governments would be enough to allow it to be a priority.

"When you get young girls into schools and they're literate," said Gates, "not only do they contribute to the economy, but the population growth that is overloading resources and is creating these problems, that starts to go down. And so the portion of the world that needs aid is far less today than it was 50 years ago."

Trade was also key to developing nations being able to become self-sufficient, said Gates, rather than relying on foreign aid or philanthropy.

"Why did China get to the point it got to?" Gates asked. "Aid was part of it but they got their governance and infrastructure up to a level where they are now going to be a net contributor. That's a very positive story for 20 percent of the world.

"We need to improve the trade rules," said Gates. "The Doha Round would have been very beneficial to Africa. That's a failure that one hopes would be fixed."

Gates, answering a question submitted by CNN viewer Jairo Martinez on how aid money was monitored, said that health priorities such as AIDs treatment, vaccines and malaria nets were all measurable.

"My foundation says for every dollar we put in, how many lives have we saved? And, as you save lives, amazingly you actually reduce the population growth and improve the entire ability of the country to move forward."

CNN viewer Phill Elliott asked Gates, through a submitted question, about the importance of the $100 laptop, intended to improve access to education in developing nations.