LONDON, England (CNN) -- One revolutionized women's hair in the 1960s. Another brought fear to Middle Earth. Another is a champion golfer who now designs courses all over the world. 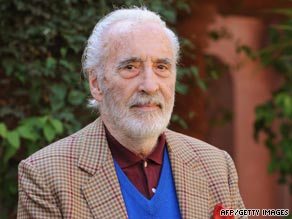 Christopher Lee is famous for playing Count Dracula and his roles in "Lord of the Rings" and "Star Wars" films.

Vidal Sassoon, Christopher Lee and Nick Faldo are among those recognized this year on Queen Elizabeth's birthday honors list.

Lee and Faldo will both receive knighthoods, meaning they can now be known as "Sir Christopher" and "Sir Nick."

Lee, 87, is famous for his portrayal of dark villains, starting with Count Dracula in a series of movies from the late 1950s until the 1970s. He gained a new generation of fans in in the past decade through is role as the bad wizard Saruman the White in the the "Lord of the Rings" trilogy, and as the evil Count Dooku in two "Star Wars" prequels.

Faldo is now almost as famous for designing golf courses as he is for playing the sport. He also serves as a television commentator.

A knighthood is the highest honor, and recipients may use the title "Sir" before their names. The equivalent for women is to be awarded the title of "Dame." They recognize a "pre-eminent contribution" in any field.

Next come CBEs, or Commanders of the Order of the British Empire, which recognize contribution to a slightly lesser degree. Recipients may not use the title of sir or dame but may use the initials after their names.

Sassoon will be awarded a CBE for his services to the British hairdressing industry. It recognizes a lifetime of achievement for Sassoon, who as a young boy spent years in a London orphanage after his father left and his mother could not afford to care for him.

Later, after his mother dreamed of her son being in a barber shop, she apprenticed him to a local barber. That began a career that saw him develop two classic hairstyles of the Sixties -- the Bob and the even shorter Five-Point Cut -- along with an eponymous hair care line, range of hair care tools, and chain of salons.

Also receiving a CBE is Jonathan Pryce, a Golden Globe-nominated actor who has had roles in the "Pirates of the Caribbean" movies, "Ronin," and the James Bond film "Tomorrow Never Dies." He won a best actor award in 1995 at Cannes for his part in the movie "Carrington."

A large number of artists and others in creative fields are featured on this year's list.

Andrew Motion, who was Britain's poet laureate until he stepped down this year, will receive a knighthood, and several names in fashion will also receive awards.

Fashion designer Jeff Banks will receive a CBE; Frances Marie Corner, the head of the London College of Fashion, will receive an OBE; and MBEs will go to Christopher Bailey, the creative director at Burberry, and Natalie Massenet, the founder of online designer shopping site Net-a-Porter.

Honors lists are published twice a year -- once on New Year's Day and once in June, to mark the queen's "official" birthday. The queen's actual birthday is in April but she celebrates it in June because the weather is better.