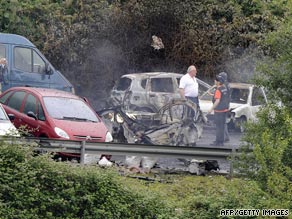 Police investigate the vehicle destroyed by a car bomb in Spain's Basque region.

Spain's Prime Minister blamed the attack on the Basque separatist group ETA, although there was no warning call before the explosion, as often happens in ETA attacks.

The car exploded at 9:05 a.m. (3:05 a.m. ET) in an open-air parking lot in the Basque town of Arrigorriaga and damaged five other cars. Firefighters quickly extinguished the blaze, and police moved in to investigate.

The officer was a senior figure in the fight against ETA and the explosion was caused by a limpet bomb placed underneath the car, officials told CNN partner station CNN+. A limpet bomb is one that is stuck to the underside of vehicle.

Arrigorriaga is about 30 miles south of the largest Basque city of Bilbao.

ETA's last fatal victim was a businessman who was shot dead in the same region last December.

"My stance to stop ETA is unbreakable, so that people in the Basque country and Spain can live in peace, to halt this barbarity," said Prime Minister Jose Luis Rodriguez Zapatero, after the attack.

ETA is blamed for more than 800 deaths in its more than four decades of fighting for Basque independence. The European Union and the United States list it as a terrorist group.

ETA has threatened Lopez, who is a socialist and the first non-nationalist Basque president in 30 years. He has also vowed to stop the group.

There are about 600 ETA members or suspected members in Spanish jails and 150 others in French jails, authorities in both countries have told CNN.