PARIS, France (CNN) -- The French National Assembly announced Tuesday the creation of an inquiry into whether women in France should be allowed to wear the burka, one day after President Nicolas Sarkozy controversially told lawmakers that the traditional Muslim garment was "not welcome" in France. 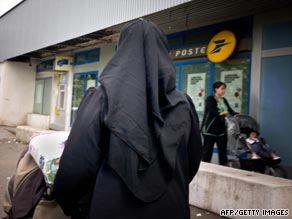 A cross-party panel of 32 lawmakers will investigate whether the traditional Muslim garment poses a threat to the secular nature of the French constitution. They are due to report back with their recommendations in six months.

Last week 57 lawmakers -- led by communist legislator Andre Gerin -- signed a petition calling for a study into the feasibility of legislation to ban the burka in public places.

On Monday Sarkozy declared in a keynote parliamentary address that the burka, which covers women from head to toe, is "not welcome" in France.

Watch why burkas are such a controversial issue in France »

The right of Muslim women to cover themselves is fiercely debated in France, which has a large Muslim minority but also a staunchly secular constitution. Should Muslim women in France be banned from wearing the burka? Sound Off below

Last year, France's top court denied a Moroccan woman's naturalization request on the grounds that she wore a burka.

Some lawmakers have called for burkas to be banned completely, claiming they are degrading to women. They also include housing minister Fadela Amara, a Muslim-born women's rights campaigner, who has called the garment "a kind of tomb for women."

"We cannot accept in our country women trapped behind a fence, cut off from social life, deprived of any identity. This is not the idea that we have of a woman's dignity," Sarkozy said Monday.

But French Muslim leaders say that only a small minority of women wear the full veil and had previously criticized calls for the issue to be the subject of a parliamentary inquiry.

"To raise the subject like this, via a parliamentary committee, is a way of stigmatizing Islam and the Muslims of France," Mohammed Moussaoui, the head of the French Council for the Muslim Religion, told AFP last week.

"We are shocked by the idea parliament should be put to work on such a marginal issue."

According to CIA estimates, between 5 and 10 percent of France's 64 million population are Muslim. The country does not collect its own statistics on religion in accordance with laws enshrining France's status as a secular state.

France is not the only European Union country to have considered banning the burka. Dutch lawmakers voted in favor of a ban in 2005, although the government of the time was defeated in elections before it could pass legislation to outlaw the garment.

All About France • Nicolas Sarkozy