(CNN) -- A Turkish television show is offering contestants what it claims is the "biggest prize ever" -- the chance for atheists to convert to one of the world's major religions. 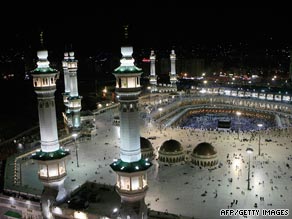 The TV show offers converts to Islam the chance to visit Mecca.

The show, called "Tovbekarlar Yarisiyor," or "Penitents Compete," features a Muslim imam, a Catholic priest, a Jewish rabbi and a Buddhist monk attempting to persuade 10 atheists of the merits of their religion, according to CNN Turk.

If they succeed, the contestants are rewarded with a pilgrimage to one of their chosen faith's most sacred sites -- Mecca for Muslims, Jerusalem for converts to Judaism, a trip to Tibet for Buddhists and the chance to visit Ephesus and the Vatican for Christians.

Ahmet Ozdemir, deputy director of Turkish channel Kanal T, which will air the show from September, said the program aimed to "turn disbelievers on to God."

"People are free to believe anything they want. Our program does not have a say," he said, according to Turkish newspaper Hurriyet.

Contestants will be judged by a panel of eight theologians and religious experts prior to going on the show to make sure their lack of faith is genuine.

But the show has been condemned by Turkish religious leaders. The head of the country's supreme council of religious affairs, Hamza Aktan, told CNN Turk that it was "disrespectful" to place different faiths in competition with each other and accused Kanal T of using religion to boost ratings.

"To do such a thing for the sake of ratings, not only with Islam but with all religions is disrespectful," said Aktan. "Religion should not be the subject of this type of program."

Although Turkey has a predominantly Muslim population and culture, religion is a sensitive subject because of the country's staunchly secular constitution which outlaws most displays of faith in public life.

Aylin Yazan at CNN Turk contributed to this story.