MOSCOW, Russia (CNN) -- On the eve of a two-day summit with U.S. President Obama, Russian President Dmitry Medvedev says both countries are "moderately optimistic" about "resetting" their relations. 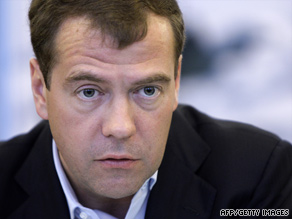 In an interview with Italian media RAI and Corriere della Sera, Medvedev said relations "have begun to revive" after a period of significant deterioration during the administration of President George W. Bush.

The top issue on the agenda for the two leaders, Medvedev said, is working out a new treaty on limiting strategic offensive nuclear weapons to replace the 1991 START I agreement, which expires December 5.

The Russian leader stakes out the position Russia has held for some time: that the issue of reducing those weapons is linked to the issue of a missile defense system, and he repeated his opposition to the missile defense shield the United States has proposed to be installed in Poland and the Czech Republic. The Bush administration raised the idea; the Obama administration is reviewing the plan and has not decided whether to proceed.

But, significantly, Medvedev said he thinks "we are fully able to find a reasonable solution" to the standoff.

"In order to resolve this issue, we do not necessarily have to cancel out all the previous decisions that have been made," he said. "It is enough to show restraint, to show an ability to compromise. And then we can agree on the basic foundations of a new START treaty and agree at the same time on how we will approach missile defense."

The president's remarks are the clearest expression yet of Russia's position on linkage, and they appear to indicate that Russia will not torpedo ongoing negotiations to replace the START I treaty just because Moscow opposes the U.S. missile defense proposal.

"The Russian Federation is not against the development of such a means of defense," Medvedev said, "but we believe that it should not be unilateral nor, in essence, directed against one of the participants in this dialogue, a major nuclear country such as Russia. We believe that the decisions that were taken on this topic have put us in a difficult position."

A missile defense system, he said, "must refer to global action to protect ourselves from countries which actually pose a threat today. And we are ready for such a dialogue with the United States of America."

U.S. officials insist that the Obama administration wants to work with Russia on missile defense as part of a network of interconnected systems that might include sites in Russia. But final proposals on this are on the back burner as the administration carries out a major review of its defense policy in a "nuclear posture review," scheduled to be completed by this fall.

The Russian president, however, rejects the U.S. explanation that the missile defense system is aimed at threats from Iran.

"They are too far apart geographically. I do not understand how people can say that missile defense is linked to the problems of the Middle East," he told the Italian media. "Therefore, it seems to me that all these arguments have been developed simply to justify the decisions taken by the previous administration of the United States."

All About Barack Obama • Dmitry Medvedev