ROME, Italy (CNN) -- Pope Benedict XVI, on the eve of a global economic summit, lashed out at modern capitalism for being shortsighted and short on ethics. 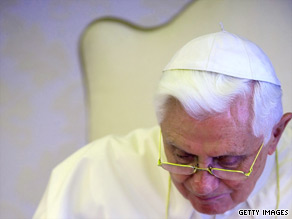 The papal letter was released as the heads of leading industrialized nations started gathering in central Italy for the Group of Eight economic summit, which begins Wednesday.

U.S. President Barack Obama is expected to speak about the economic outlook. The leaders of the other G-8 nations -- Japan, Britain, France, Italy, Germany, Canada and Russia -- also are scheduled to speak.

Pope Benedict will meet Obama on Friday at the close of the three-day summit, which is being held near the central Italian city of L'Aquila. A magnitude-6.3 earthquake hit the city on April 6, killing about 300 people and leaving some 45,000 homeless.

In his letter, Benedict challenged bankers to turn away from the practices blamed for bringing about the global economic crisis and instead use their power to help the world create wealth and economic development.

"Above all, the intention to do good must not be considered incompatible with the effective capacity to produce goods," Benedict said. "Financiers must rediscover the genuinely ethical foundation of their activity, so as not to abuse the sophisticated instruments which can serve to betray the interests of savers."

The world financial crisis and the downturn in markets took a big chunk out of the retirement savings of millions of people.