L'AQUILA, Italy (CNN) -- Leaders of the world's most powerful economies were meeting Wednesday in the center of an Italian earthquake zone for a summit that, despite an agenda tackling the global financial crisis, world poverty and climate change, is not expected to produce seismic results. 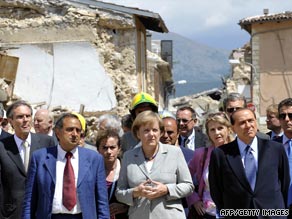 U.S. President Barack Obama joined the leaders of Britain, Canada, France, Germany, Italy, Japan and Russia in the mountain town of L'Aquila -- which was devastated by a 6.3-magnitude quake in April -- for the meeting of Group of Eight nations.

Chinese President Hu Jintao was also expected to attend the summit but returned home Wednesday to deal with an outbreak of deadly ethnic clashes in China's remote western Xinjiang province that have prompted a massive security clampdown.

China's problems add to a list of global concerns overshadowing the talks, including the recent political turmoil in Iran and North Korea's nuclear ambitions -- both of which have prompted renewed talk of major economic sanctions.

After the summit's first session, Obama and other leaders toured the area damaged by the quake, which killed about 300 people and left some 45,000 homeless.

Obama is expected to push for further international financial stimulus packages at the summit, reflecting continued concerns over the global economic crisis despite massive government spending to halt the downturn.

The summit's host, Italian Prime Minister Silvio Berlusconi, is likely hoping that the three-day event will help draw the spotlight away from recent scandals that have prompted questions over his suitability to lead.

Prone to gaffes and facing a divorce from his wife of 19 years, the Italian prime minister is being investigated over allegations he paid for sex -- claims that he has repeatedly denied.

Watch Berlusconi talk to CNN about scandals he faces »

Berlusconi has made a big show of moving the summit from its original venue on the island of Sardinia to L'Aquila, in the mountains of central Italy, as a gesture of support for the region.

Meanwhile Pope Benedict XVI launched his own verbal assault on global capitalism ahead of the meeting, lambasting "grave deviations and failures" and calling for a "profoundly new way of understanding business enterprise."

The pope, who is due to meet Obama on the G-8 summit's sidelines, challenged bankers to turn away from the practices blamed for bringing about the global economic crisis and instead use their power to help the world create wealth and economic development.

"Above all, the intention to do good must not be considered incompatible with the effective capacity to produce goods," Benedict said.

Following on from a major G-20 summit of leading powers in London in April that drew criticism for failing being little more than a photo opportunity despite pledges of global economic cooperation, some have questioned what tangible gains can be made from this week's meeting.

Ahead of the summit, Britain's Prime Minister Gordon Brown warned that the financial crisis was far from over, echoing White House calls for further economic stimulus -- something analysts say are likely to meet resistance among European leaders.

Little progress is also expected to made on climate change, which features high on the L'Aquila agenda, with wrangling expected to continue over carbon emission cuts to be made by developing nations.

Though China's Hu was forced to return home, representatives of the other "plus five" group of emerging economic giants, including Brazil, India, South Africa and Mexico, were to attend Thursday's session, with discussions looking ahead to a major environmental summit in Copenhagen in December.

Former UK Prime Minister Tony Blair, who is campaigning for greater environmental awareness, told CNN on Tuesday that the G-8 was expected to set out a framework for tackling climate change that would be carried forward to the Copenhagen meeting.