MOSCOW, Russia (CNN) -- The head of a leading Russian human rights group accused the presidents of Russia and Chechnya of complicity in murdering their top activist in Chechnya. 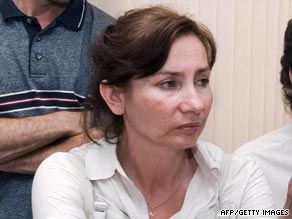 Natalya Estemirova, pictured in 2007, had been openly critical of Chechnya's president, Ramzan Kadyrov.

"I am confident about who killed Natalya Estemirova. We all know this person. His name is Ramzan Kadyrov, President of the Chechen republic," Oleg Orlov, the chairman of the Russian human rights group Memorial said on the group's Web site Thursday.

"Ramzan was intimidating and insulting Natalya, and considered her his personal enemy. We don't know whether it was him personally who ordered her [murder] or it were his aides who wanted to please their boss. As far as [Russian] President [Dmitry] Medvedev is concerned, it seems that he doesn't mind having a murderer as head of one of the Russian regions."

Estemirova, 50, was kidnapped outside her home in Chechnya Wednesday, Orlov said, citing eyewitnesses, and found dead in the neighboring Russian republic of Ingushetia later the same day.

Her body was riddled with bullets, Russian prosecutors said -- several shots to the abdomen, and one to the head.

The winner of three international human rights awards, she was a leading activist in the North Caucasus area who had been openly critical of Kadyrov and his methods.

Kadyrov vowed Thursday that he would personally oversee the investigation and assure her killers were punished.

"She couldn't have had enemies among reasonable people," he said in a statement on the Chechen government Web site. "Those who took away her life have no right to be called humans, they don't deserve any mercy, and should be punished as the most cruel criminals.

"I have no doubts whatsoever that those who ordered and conducted this crime will face trial," he said. "That is the very least that the government and society must do in commemoration of Estemirova."

Medvedev said Thursday the murder was "a very sad event," adding it was "absolutely clear... her murder is linked to her professional activities.

"Her type of professional activity is needed by any normal state. She did very useful things. She spoke the truth. She openly, sometimes harshly assessed some types of processes that occurred in our country, and this is the value of human rights workers, even if they are not comfortable," Medvedev said Thursday on a visit to Germany.

"This is an unacceptable event, and especially if we want to intensify the relations between our two countries, it cannot remain unsolved," she said in a joint appearance with Medvedev.

Medvedev had earlier condemned the murder and said her killers should punished to the full extent of the law, his office said.

Estemirova shouted that she was being kidnapped, as she was forced into a white Lada automobile that had stopped on the road in front of her house on Wednesday morning, Orlov said.

An unidentified man grabbed her and shoved her into the car, Orlov told CNN.

Estemirova had spent years investigating human rights abuses in Chechnya, the restive Russian republic where Russian forces have fought two conflicts against separatists since 1991. Russia officially ended its military mission in Chechnya in April of this year.

The activist told CNN in 2007 she was investigating dozens of abductions and murders that had become the norm in Chechnya, where security forces were fighting a dirty war against separatist rebels.

She joins a growing list of journalists and activists killed after criticizing the Russian authorities, many of whose murders remain officially unsolved.

Top United States and European officials condemned the murder of Estemirova and demanded that the killers be brought to justice.

"Such a heinous crime sends a chilling signal to Russian civil society and the international community and illustrates the tragic deterioration of security and the rule of law in the North Caucasus over the last several months," U.S. National Security Council spokesman Mike Hammer said in a statement.

"How many more Natalya Estemirovas and Anna Politkovskayas must be killed before the Russian authorities protect people who stand up for the human rights of Russian citizens?" Council of Europe Secretary General Terry Davis demanded, referring to the Russian investigative journalist who was killed in 2006.

The Committee to Protect Journalists said in a written statement that Estemirova had "uncovered massive, ongoing human rights violations in Chechnya by the federal and regional authorities."

"The killers of this courageous reporter, one of the few left in Chechnya, must not be allowed to walk free like so many before them," CPJ Deputy Director Robert Mahoney said.

She won three international awards for human rights activities -- including the inaugural Anna Politkovskaya Award, named for the murdered journalist with whom she often worked.

Estemirova was Politkovskaya's "most frequent companion during travel and investigations in Chechnya," the organization Reach All Women in War said in announcing the prize for Estemirova. "They investigated a number of cases together -- about which Anna wrote for (the newspaper) Novaya Gazeta and Natalya wrote for Memorial's Web site and for local newspapers."