LONDON, England (CNN) -- A British woman won a major legal victory Thursday in her fight to die with her husband by her side if she travels abroad for assisted suicide. 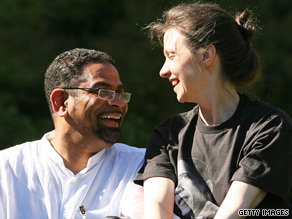 Debbie Purdy has said she wants to die next to her husband, Omar Puente.

Debbie Purdy, 46, who has multiple sclerosis, has been waging a lengthy legal battle to clarify Britain's ambiguous laws on assisted suicide.

The House of Lords, Britain's highest court, ruled in her favor on Thursday, ordering the country's director of public prosecutions to spell out the criteria under which it will seek to prosecute someone who helps another person commit suicide.

"I'm ecstatic," Purdy said in a statement issued by the campaign organization Dignity in Dying.

"I want to live my life to the full, but I don't want to suffer unnecessarily at the end of my life. This decision means that I can make an informed choice, with Omar (Puente, her husband), about whether he travels abroad with me to end my life."

Watch Purdy react to the ruling »

Purdy had been suing to force the British authorities to specify exactly when someone would be prosecuted for helping another person commit suicide. What's your view? When is assisted suicide acceptable?

Doing so is technically illegal under a 1961 law, and anyone found guilty faces up to 14 years in prison.

But the Director of Public Prosecutions has the discretion to choose whether or not to prosecute.

The law doesn't make clear at what point a person has broken it -- whether it is illegal to sit with a person on the plane to the clinic, open the door of the car to the airport, or even help them arrange the trip. No one has ever been prosecuted for the crime in the United Kingdom.

Lord James Hope of Craighead, in his ruling on the case, emphasized that the verdict did not grant Purdy's husband immunity from prosecution.

The court did not rule on the 1961 Suicide Act at all, he pointed out.

"It is no part of our function to change the law in order to decriminalize assisted suicide," he wrote. "If changes are to be made, as to which I express no opinion, this must be a matter for Parliament."

Purdy had spent more than two years fighting the case through Britain's courts, arguing that the lack of clarity in the law violated her human rights.

The House of Lords ruled in her favor, in its final case as Britain's highest court. A new Supreme Court will come into being in the fall, replacing the old system under which some members of the House of Lords, the Law Lords, rule on cases on behalf of the entire chamber.

Purdy has said she wants to die next to her husband.

Before the ruling in her favor, she had said she would travel abroad on her own to die if she lost the case, so her husband would be sure not to face prosecution.

That would have meant Purdy would die alone.

The courts ruled the other way in a similar case eight years ago.

British and European courts refused to guarantee that the husband of Diane Pretty would not be prosecuted for helping her to travel abroad to end her life. She died in England after motor neuron disease, an incurable degenerative disease, caused respiratory failure in May 2002.