UK Pentagon hacker loses appeal, will be sent to U.S.

LONDON, England (CNN) -- The Briton accused of hacking into U.S. government computers on Friday lost his court appeal to have his case heard in Britain, his legal team said. 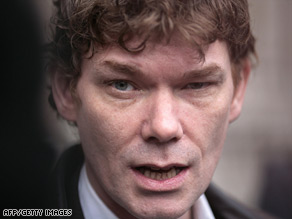 Briton Gary McKinnon is accused of carrying out the biggest ever U.S. military hacking operation.

The decision means Gary McKinnon faces extradition to the United States, where he is wanted for allegedly hacking into computers at the Pentagon and NASA.

McKinnon, who has admitted breaking the law and intentionally gaining unauthorized access to computer systems, wanted to be tried in Britain rather than the United States.

He planned to ask judges at the High Court in London to review a recent decision by the director of public prosecutions not to pursue legal action in Britain, a spokeswoman at the prosecutor's office told CNN July.

The prosecutor's decision effectively cleared the way for McKinnon's extradition.

The U.S. government says McKinnon carried out the biggest military computer hacking of all time, accessing 97 computers from his home in London for a year starting in March 2001 and costing the government about $1 million.

McKinnon, currently free on bail in England, has said he was simply doing research to find out whether the U.S. government was covering up the existence of UFOs.

Prosecutors in the United States and Britain disagree.

"These were not random experiments in computer hacking, but a deliberate effort to breach U.S. defense systems at a critical time which caused well-documented damage," Alison Saunders of the Crown Prosecution Service said in February. "They may have been conducted from Mr. McKinnon's home computer -- and in that sense there is a UK link -- but the target and the damage were trans-Atlantic."

In one case, McKinnon allegedly crashed computers belonging to the Military District of Washington.

McKinnon is believed to have acted alone, with no known connection to any terrorist organization, said Paul McNulty, the former U.S. attorney for the Eastern District of Virginia.

A U.S. federal grand jury indicted McKinnon on seven counts of computer fraud and related activity. If convicted, he would face a maximum of 10 years in prison on each count and a $250,000 fine.

McKinnon's lawyer, Karen Todner, complained that the United States has never provided evidence to prosecutors or McKinnon's legal team to support their extradition request -- and in fact, under Britain's Extradition Act of 2003, U.S. prosecutors are not required to.

McKinnon has previously said it was easy for him to access the secret files.

"I did occasionally leave messages in system administrators' machines saying, 'This is ridiculous,'" McKinnon has said. "(I left) some political diatribes as well, but also a pointer to say, you know, this is ridiculous."

McKinnon was on the brink of extradition in August 2008, when the European Court of Human Rights in Strasbourg, France, refused to reconsider the decision to send him to the United States, effectively clearing the way for his transfer.

Shortly after that decision, however, McKinnon was diagnosed with Asperger syndrome, and he claims that diagnosis changed the case for extradition.

It was on that basis that McKinnon made his appeals in Britain.

Asperger syndrome is a form of autism that affects a person's social communication and interaction, according to Britain's National Autistic Society.

Those affected often are of above-average intelligence and have fewer problems speaking than do those with autism. They sometimes have difficulty knowing when to start or end a conversation and can be very literal in what they say, with difficulty understanding jokes, metaphors and sarcasm.

All About Jacqui Smith • NASA • Extradition