(CNN) -- Three men who escaped from prison in Belgium in a daring helicopter escape committed a string of robberies on Saturday, a police spokesman said. 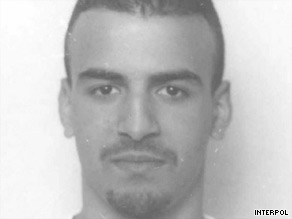 Ashraf Sekkaki is considered to be one of Belgium's most dangerous criminals.

The escapees, who include a man considered to be one of the country's most dangerous criminals, robbed a bank, a gas station and two storage facilities, said the Bruges police spokesman Sunday.

"In two hours they did four robberies," said the officer, who declined to give his name. "We think they need money."

He added that he did not know if the alleged crimes were captured on CCTV, and that police have no idea where the fugitives are now.

Sekkaki is considered one of Belgium's most dangerous criminals, Interpol said, with more than 16 convictions for violence, including bank robbery and kidnapping.

Accomplices of the three inmates hijacked a helicopter on July 24 and forced the pilot to land in the prison courtyard, Interpol said.

"It was just like in a film," helicopter pilot Ludwig Louwagie told the Belga news agency.

He said a couple had booked a sightseeing tour of the Bruges region. While in flight, the man suddenly pressed a weapon against his temple, Louwagie told Belga.

He was unhurt, Belga reported.

The jailbreak prompted Interpol to issue an international alert to police around the world to be on the lookout for the men.