Berlin, Germany (CNN) -- Amir Farshad Ebrahimi sits at his computer in a small apartment in Berlin clicking through data bases with thousands of photos. He clicks back and forth between the Web and the photos of demonstrations in Iran for hours. 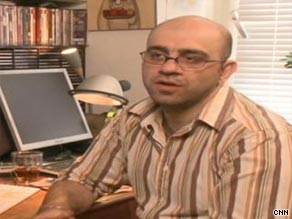 Ebrahimi names and shames those he recognizes on the Web.

The pictures show plain-clothed men beating up demonstrators in Iranian cities after the disputed presidential elections. Every once in a while he circles a head, a baton or a gun.

"This is one of the guys I used to know," he says. "We were in Ansar-e Hezbollah together. I was very surprised to find him here."

Ebrahimi says he knows many of those who are now beating up demonstrators in Iran because he used to be one of them, a member of a religious militia called Ansar-e Hezbollah. His story gives an insight into the make-up and the ideology of the hard-line groups that are cracking down on demonstrators in Iran.

"None of them are police. Most of them are Basij or Ansar-e Hezbollah members. These are a series of paramilitary groups which work under the direct supervision of the leader, forces which work based on their ideology."

Ebrahimi names and shames those he recognizes on the Web. He publishes their names and phone numbers and sometimes even their addresses, "so people in their neighborhood know what they are doing."

He says some of them contact him at home and threaten to kill him, but others simply feel betrayed by their former comrade.

"One of them called me and said: 'what you are doing us unethical. You are ruining our friendship.' I told him he was acting unethically and that he has the blood of the people on his hands, I didn't talk to him any further."

Ebrahimi was a founding member of the Ansar-e Hezbollah group, which like many others has its roots in the Iran-Iraq war in the late 1980s. In 1988, when Ebrahmi was just 13 years old, he says he forged his ID and went to the frontline against Saddam Hussein's army.

He shows us pictures of him as a young man, trying hard to look older by growing a beard, carrying a rifle or manning an anti-aircraft cannon.

"When an Iranian Basij soldier got shot right next to me, that was the first time I saw a dead body next to me. It was then I realized where I actually was and I asked myself what was I doing there anyway?"

After the war, Ebrahimi and others decided they were now the true guardians of the Islamic revolution and would defend it against Western influence.

"For example, we were opposed to the commercial advertisements of western products, we were opposed to the economic conditions, or the political conditions. So anyway we had some demands and believed we are the rightful because we said we served in the war front, we gave our life and health, not to defend a country that is being looted now the way it was. Those demands we had brought us together to start the Ansar-e Hezbollah."

Farshad rose through the ranks of the organization he says was never meant to be political or violent.

"Mojtaba" is Mojtaba Khamenei, the son of Iran's Supreme leader Grand Ayatollah Ali Khamenei. Many Iranians accuse Mojtaba of leading the recent violent crackdown on protesters. Ebrahimi says he was also an early comrade of his on the battlefront.

Ebrahimi says he and Mojtaba spent a lot of time together. "He was a good kid, we were really good friends, and you could also truly say he also liked violence."

Over time, Ansar-e Hezbollah grew and Ebrahimi became the managing editor of the group's own newspaper. He says he quit the organization in 1999 when Ansar-e Hezbollah used violence against students during the uprising which was brutally cut down by security forces that year. "We went to a dorm and they started beating up people. That was when I took the microphone and said: 'No, Ansar-e Hezbollah is wrong, you the students are right."

Since then, Ebrahimi has become a fugitive. He was jailed in Iran then fled to Turkey and Germany where he got married and lives today. He says he was taken into custody by Turkish security forces and interrogated by the Iranian secret service who threatened to bring him back to the country.

He uses his computer, his blog and twitter to spread the information about those he says are beating up the protesters.

"When I last looked somewhere between seven to eight thousand people had visited my site and read the information, so this site has in a way turned into a reference source."