Bombs hit commercial areas of Spanish island; no one hurt

(CNN) -- Three bombs exploded on the Spanish tourist island of Mallorca on Sunday, but no one was hurt, according to Spanish news outlets. 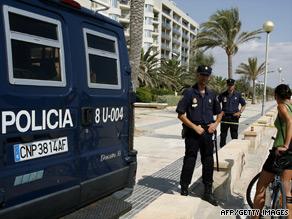 Police cordon off the route leading to the location of the blasts in Palma de Mallorca.

The three sites targeted in Sunday's attacks included two restaurants and a commercial level underneath a main square, which contains shops and parking.

The bombs were of low potency, CNN+ reported, citing authorities.

Spain's king and queen, and other members of the royal family, are vacationing on the island this month.

The group, which is blamed for more than 800 deaths in its four decades of fighting for Basque independence, is listed as a terrorist group by Spain, the European Union and the United States.

Police searched for a possible bomb at the hotel Palacio Avenida, but did not find one, and believe no bomb was there, CNN+ reported.

Sunday's attacks were the most recent in an uptick of activity for ETA, which has been battered over the past 16 months by arrests of its top leaders, including four suspected top ETA military chiefs.

The blasts came hours after ETA claimed responsibility for a series of attacks in June and July, including attacks that killed two Civil Guard agents and a police officer.

In a statement released to the Basque newspaper Gara, ETA said the earlier attacks were in retaliation for a government initiative to aggressively go after the group.

"When Spain responds with weapons, we will answer with weapons," the statement said, condemning "the campaign of repression and the attempts by the police."

The first blast Sunday occurred inside the La Rigoletta restaurant at about 3 p.m. The bomb was found in a bag in the restaurant's ladies' room, the Spanish newspaper El Pais reported, citing the national police.

The restaurant is on the Paseo del Portitxol street, in front of the Can Pere Antoni beach in Palma de Mallorca.

Map of the location »

The second bomb exploded soon after the first, in the Enco restaurant, CNN+ reported. That appeared to have been a controlled explosion set off by the police.

Spanish National Radio reported that the area around that blast was cordoned off, but that the explosion was not controlled.

The three locations are within a few hundred yards of each other.

No one was injured because the areas were empty at the time, according to Spanish National Radio.

While ETA does issue warnings, the group expressed no remorse for the death of a Spanish police officer killed when a car bomb exploded in an open-air parking lot in the Basque town of Arrigorriaga on June 19.

The group, in its statement, called officer Eduardo Puelles -- who was a senior figure in the fight against ETA -- a "torturer."

"He was also the one responsible for pressuring young independence activist militants on the street for their collaboration by means of threats," the statement said.

In the statement, ETA claimed responsibility for the three recent killings and for an explosion at a barracks of Spain's Civil Guards in the northern Spanish city of Burgos. That blast injured more than 40 people, including families of Civil Guards housed in the barracks, according to Spanish authorities.

ETA blamed what it called the government's "repressive strategy."

"What ETA has been looking for during long decades is a negotiated political solution," the group said.

Spain's interior minister, Alfredo Perez Rubalcaba, reiterated a week ago -- shortly after the two Civil Guards were killed in Mallorca -- the government's stance that ETA members will be arrested and tried, ruling out a resumption of negotiations.

Spanish media last week cited numerous politicians and analysts who suggested that ETA's recent spate of violence might be aimed at trying to force the government to the negotiating table.

CNN's Per Nyberg, Adrian Bernal and Al Goodman contributed to this report.