LONDON, England (CNN) -- DNA testing to try to identify hundreds of bodies buried in a mass grave during World War I will start this week, the British and Australian ministries of defense announced Monday. 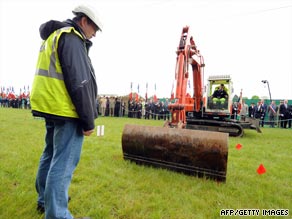 The bodies come from Fromelles in northern France, where thousands of British and Australian troops were killed or wounded in a single night in 1916 -- a night the Australian military still considers among the worst in its history.

An exploratory dig in May of this year confirmed that there are between 250 and 300 bodies buried at the site.

Enough DNA has been recovered from teeth and bones to make full-scale testing worthwhile, the British Ministry of Defence said.

Pieces of uniforms including belt buckles and buttons have also been found, which will help with identification, the ministry said.

"Each one of these soldiers will be laid to rest with the dignity they deserve and we owe it to them to do all we can to identify them," British Veterans Minister Kevan Jones said in a statement.

The DNA testing program will be the largest undertaking to identify individuals killed in combat ever commissioned, the ministry said.

The announcement comes only a week after the burial of the last British veteran of World War I still living in the United Kingdom.

So many soldiers died on the night of July 19, 1916, that many were never found, identified, or given a proper burial.

By morning, about 2,300 British and Australian soldiers were dead. About 5,000 others were wounded.

There has been speculation for decades that the Germans recovered hundreds of bodies and put them into mass graves, not forgotten, but anonymous.

Last year, preliminary digs commissioned by the Australian government located five mass graves near the site of the battle.

"It's the largest military find since the end of the Second World War," said a spokesman for the Commonwealth War Graves Commission.

"I have been on the commission almost 11 years and it's like nothing I have ever experienced. I have never known anything to have this sort of numbers of possible remains," Peter Francis told CNN.

The commission is in the middle of a 15-month project to disinter the bodies, attempt to identify them, and rebury them in individual graves in a new cemetery on the site.

The resulting graveyard will be the first new one consecrated by the commission for almost 50 years, Francis told CNN by phone.

The British and Australian governments have asked people who think their relatives may have died at the site to get in touch, Francis said.

The bodies of more than 165,000 Commonwealth soldiers killed on the Western Front during the First World War are still missing, the commission says.

The commission is a non-profit organization founded in 1917 that commemorates the dead of both world wars from the British Commonwealth.