BERLIN, Germany (CNN) -- A black politician campaigning in eastern Germany has become the victim of a racist campaign by a far-right party. 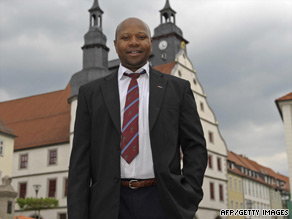 Zeca Schall says he is not thinking of leaving Germany despite the threats.

The National Democratic Party of Germany (NPD) says it is trying to persuade Zeca Schall, a German citizen who came from Angola 21 years ago, to leave the country.

Schall is a member of the Christian Democratic Union, the party led by German Chancellor Angela Merkel, and has been named as a CDU expert for the integration of minorities.

The NPD's Web site calls Schall the CDU's "quota negro" and urges him to leave the country.

"The CDU seems to be realizing that even after years of re-education, negroes cannot be accepted as permanent guests in our state," said the NPD, which goes by its German initials.

Watch more about the campaign against Schall »

Schall told CNN he had never before been subjected to such a level of racial hatred.

"I am shocked," he said Thursday at a campaign event in Erfurt, the capital of Thuringia. "I simply cannot believe that people would do this to fellow humans."

Schall, who appears on a CDU election poster, said he is scared.

"I have police patrolling at my house day and night, and some officers stay in my house overnight," he said.

The situation escalated Wednesday when the NPD's national leadership held a rally in Schall's adopted hometown of Hildburghausen. Party Chairman Udo Voigt tried to speak with Schall "and persuade Mr. Schall that he is needed more in Angola than in Germany," the NPD said in a news release.

He is campaigning for the CDU for a state election in Thuringia, which is in the former communist East Germany. Right-wing extremism is generally a bigger problem in eastern Germany than in the west of the country, and citizens of Hildburghausen told CNN that, though most people support the politician, fascism is a problem in the area.

"Of course we have a base of right-wingers here," a passer-by said at the market in the town's center.

But most of those questioned by CNN denounced the campaign against Schall and said he is a respected member of the community.

"I am not only a member of the CDU, I am also a voluntary firefighter at the local department," Schall said.

Frank Schwerdt, the NPD's leader in Erfurt, tried to downplay the events.

"This is not a personal campaign against Mr. Schall," Schwerdt said. "We simply feel that many citizens don't want foreigners to have a say in our politics."

The NPD has been under surveillance by Germany's Office for the Protection of the Constitution for alleged contacts with illegal neo-Nazi groups. However, past efforts to ban the party have failed on technical grounds.

But members of the Christian Democratic Union told CNN that, since the racist campaign started against Schall, he has received several death threats and the party will no longer allow him to do media interviews because of the risks.

At Thursday's campaign event in central Erfurt, increased police presence was noticeable and CDU members said plainclothes officers had been dispatched among the crowd.

All About Germany • Christian Democratic Union of Germany