LOCKERBIE, Scotland (CNN) -- Abdelbaset Ali Mohmed al Megrahi's fate hangs in the balance. The Libyan man convicted for the 1988 Lockerbie bombings has terminal prostate cancer and, according to his lawyers, just weeks to live. 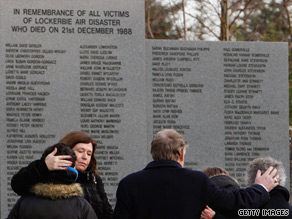 Mourners at the 20th anniversary memorial service for the victims of the Lockerbie bombing.

Scotland's Justice Minister Frank MacAskill is weighing up whether to release him on compassionate grounds so he can die at home; to transfer him to a Libyan jail under a prisoner transfer agreement drawn up between Libya and the UK; or whether to keep him in a Scottish jail for the rest of his days.

That is certainly the preferred option of the U.S. Secretary of State Hillary Clinton who last week wrote to Mr MacAskill urging him not to send Al Megrahi home.

In Lockerbie itself, matters of politics seem far removed. George Stobbs was one of the first policemen on the scene when the Boeing 747 crashed into Sherwood Crescent.

"I've never talked about the politics of the thing because I had no interest," he says. "People here aren't interested in the politics, they just want to carry on with their lives."

Stobbs has vivid memories of the night of December 21, 1988 -- the "shortest and darkest night of the year," he says.

"The houses were just slowly burning and more houses were catching fire. The windows were popping, the gutters were burning, everything was burning. It was like hell. I remember seeing a wrought iron gate in the distance and I remember it was dripping like molten butter, drip drip dripping away."

At first Stobbs thought it was a military aircraft which had crashed into the town. Then he heard that the nose cone of a 747 had landed in a field three miles from Lockerbie and he knew that he was dealing with far greater numbers of dead.

"We were told about the 747," he says, "and we realized we weren't looking for twenty people but for 300. But where were they?"

There is a small memorial room beside the little church of Tundergarth, across the road from where the nose cone landed. Inside are inscriptions from visitors commemorating the huge loss of life and photographs of each of the 270 people who died in the Lockerbie bombing.

"Gentle Lockerbie" reads one of the inscriptions from a family member who lost a loved one. "Some say the land there is now tainted, I say it is blessed."

In the field itself there are no marks to suggest where the nose cone landed. The local farmer points to the horizon across the rolling Scottish hills.

"Between here and the top of the hill, here on my father's farm, we found 120 bodies," he says.

The force of the explosion and the wind that night blew bits of the plane, personal possessions and body parts across a vast area.

Stobbs, and hundreds of policemen and other volunteers combed 845 square meters of land looking for clues as to what brought the plane down. Documents from the plane were even discovered in the North Sea, 60 miles away.

The crucial piece of evidence that implicated Al Megrahi was a scrap of clothing wrapped around a part of the device used to detonate the suitcase bomb. It was traced back to a Maltese boutique whose shop-owner recognized Al Megrahi.

Lockerbie local John Gair said he was never entirely convinced of Al Megrahi's guilt. "I did feel that some of the evidence was circumstantial," he says. "I think partly out of compassion and partly out of a possible element of doubt, he should be allowed out."

As he looks down Sherwood Crescent at the neat rows of houses, not yet twenty years old, he says: "Life goes on and once a tragedy like this is over people pick up the threads of their lives. And they don't forget but they don't dwell on it. Because there's no earthly point in dwelling on any of this."

270 people from 21 nations lost their lives in the beautiful hills around Lockerbie. Some of them had been so badly incinerated no trace of them was ever found, just their personal belongings and the Pan Am passenger list which proved they'd been on board.

Twenty years later in the town of Lockerbie, the streets have been rebuilt, the past buried, but not forgotten.

All About Lockerbie • Al Megrahi