MOSCOW, Russia (CNN) -- The hijackers who seized a Russian ship and its crew had demanded a $1.5 million ransom earlier this month, an official with the insurance agency told CNN on Tuesday. 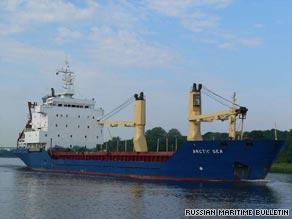 "The person spoke in English, apparently trying to change his voice to avoid being recognized, and introduced himself as a go-between," said Vladimir Dushin, vice president of Renaissance Insurance, the company that insured the vessel, the Arctic Sea.

A recording of the August 3 phone call was turned over to Russian special services, which launched an investigation, Dushin said.

The Arctic Sea was located Monday about 480 kilometers (300 miles) from Cape Verde, an island nation a few hundred miles from the coast of western Africa. It had been missing for more than two weeks. The 15-man crew was unharmed.

Russian authorities have opened a criminal investigation on charges of "kidnapping by an organized group of people," the Prosecutor General's Office said Tuesday in a statement.

Dushin said he believes the man who said he represented the kidnappers got the insurance company's general phone number from the papers aboard the vessel, which are required under maritime law. The Arctic Sea has had a $4 million policy with Renaissance for several years, Dushin said.

The man on the phone demanded the $1.5 million ransom be paid within five days or they would kill the crew and sink the ship.

"If those demands are not met, or the insurance company passes this information to the police, (he said) the crew members will be killed one by one, and the ransom will be increased," Dushin said.

The crew had told authorities that eight to 12 people with guns and pistols boarded the vessel about 3 a.m. that day, masked and wearing uniforms with "police" written on them, the Malta Maritime Authority said.

At the time, Russia's ambassador to Cape Verde denied that the Arctic Sea had been spotted near the island nation.

-- CNN's Maxim Tkachenko in Moscow, Russia contributed to this report