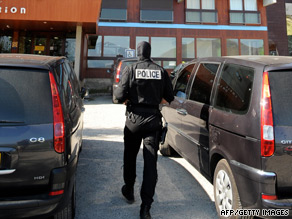 Along with them, police also detained a third man, Alberto Machain. The ministry identified all three as members of the military arm of ETA, which the government has declared a terrorist organization.

The arrests led to the discovery of a cache containing more than 220 pounds (100 kg) of explosives, the ministry said.

ETA, which the United States and European Union recognize as a terrorist network, has been blamed for more than 800 deaths since its push for Basque independence turned violent in 1968. The Basque region is in northern Spain and a small section of southern France.

The group claimed responsibility for a series of bombings across Spain in June and July that killed two Civil Guard officers and a police officer and wounded dozens. Spanish officials accused ETA of being behind four bombings in August that caused no injuries on the Mediterranean island of Mallorca.

The detentions Wednesday followed the arrests over the past six months of four suspected top ETA military chiefs and dozens of alleged militants.