GREENOCK, Scotland (CNN) -- The man convicted of murdering 270 people by blowing up Pan Am flight 103 over Lockerbie, Scotland, two decades ago received a boisterous welcome when his plane landed in his native Libya on Thursday. 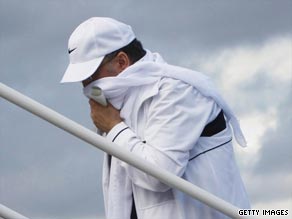 Abdelbeset Ali Mohmed al Megrahi covers his face as he boards a plane.

The 57-year-old has three months to live, according to Scottish authorities.

"Our justice system demands that judgment be imposed but compassion available," MacAskill said. "Our beliefs dictate that justice be served but mercy be shown."

Al Megrahi issued a statement that his attorney Tony Kelly read to reporters. In it, al Megrahi said the families of the Lockerbie victims "have my sincere sympathy for their unimaginable loss."

"Many people ... I know are upset that my appeal has come to the end, but nothing more can be done about the circumstances of the Lockerbie bombing," al Megrahi said in the statement.

"I share their frustration. I had most to gain and nothing to lose about the whole truth coming out, until my diagnosis of cancer."

Al Megrahi continued to maintain his innocence, complaining that he had to spend years in prison for something he did not do.

"The remaining days of my life will have to be spent under the shadow of the wrongness of my conviction," he said.

Al Megrahi said he never will return to Scotland, and he offered his gratitude and best wishes to the Scottish people.

"To those victims' relatives who can bear to hear me say this, they continue to have my sincere sympathy for the unimaginable loss that they have suffered," he said.

"To those who bear me ill will, the only thing I can say is that I do not return that to you."

According to Kelly, his client "was in good spirits" this morning and was looking forward to seeing his mother, wife and children in Libya. iReport.com: My uncle never got to say goodbye

Kelly said, "His disease is not only terminal but is in its final stages."

MacAskill said he agreed with the 2001 conviction of al Megrahi for the Lockerbie bombing -- the worst terrorist atrocity ever committed on U.K. soil. He also said he supported a severe sentence. But he said al Megrahi's lack of compassion for his 270 victims should not be a reason for Scotland to deny compassion to him.

Pan Am flight 103 exploded over the Scottish town of Lockerbie four days before Christmas in 1988, killing all 259 of those aboard the plane and 11 Scots on the ground.

Of those on board, 189 were Americans. The U.S. government responded immediately to word of al Megrahi's release, saying it "deeply regrets" the decision.

"As we have expressed repeatedly to officials of the government of the United Kingdom and to Scottish authorities, we continue to believe that Megrahi should serve out his sentence in Scotland," the White House said in a statement.

"Today, we remember those whose lives were lost on December 21, 1988, and we extend our deepest sympathies to the families who live each day with the loss of their loved ones due to this heinous crime," Clinton said.

And the FBI said in a statement it was "deeply disappointed" over the decision to release al Megrahi.

"In a case of mass murder over Lockerbie, Mr. Megrahi served less than 14 days per victim," FBI director Robert Mueller said in the statement.

The justice secretary said he decided not to transfer al Megrahi to a Libyan prison, even though a prisoner transfer agreement exists between the United Kingdom and Libya, but instead chose to set him free on compassionate grounds.

Families of the Lockerbie victims have been sharply divided over whether al Megrahi should ever be released.

Susan Cohen, who lost her 20-year-old daughter, was adamant about her position, calling al Megrahi a "mass murderer" and his release "appalling."

"First of all, he got his compassionate release when he got life imprisonment and not capital punishment, which Scotland doesn't have," Ammerman told CNN. He should have remained in prison, then after his death, his body could have been returned to Libya, he said.

"Three, let's cut through all this information. He's being released because big business in the United States, Great Britain want the oil in Libya, and that's what's driving this whole wagon," he said.

Al Megrahi was convicted in 2001 after the prosecution argued he had placed the bomb, hidden in a suitcase, on a flight from Malta to Frankfurt, Germany. There, prosecutors said, the bomb was transferred onto the Pan Am plane that went first to London, England's Heathrow Airport and then took off for New York.

The prosecution maintained al Megrahi, who worked at Malta's Luqa Airport, was an agent for the Libyan intelligence services and had been seen buying clothes that were in the suitcase that contained the bomb.

Libya has formally accepted responsibility for the bombing and has compensated the families, though Libyan leader Moammar Gadhafi later denied any culpability.

Al Megrahi was diagnosed in September 2008 with terminal prostate cancer, and medical officials have said his condition is rapidly deteriorating, MacAskill said. He said he declined an option to free al Megrahi and allow him to live in Scotland after senior police officers cited the severe security implications.

"Scotland will forever remember the crime that has been perpetrated against our people and those from many other lands," MacAskill said. "The pain and suffering will remain forever. Some hurt can never heal. Some scars can never fade.

"However, Mr. al Megrahi now faces a sentence imposed by a higher power. It is one that no court, in any jurisdiction, in any land, could revoke or overrule. It is terminal, final and irrevocable. He is going to die."