(CNN) -- The release of Lockerbie bomber Abdelbaset Ali Mohmed al Megrahi from prison in due to terminal illness was greeted with wideapread derision from newspapers on both sides of the Atlantic, with few having good words for Scottish authorities behind the decisions. 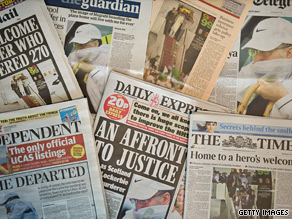 Newspapers in both the UK and the U.S. have broadly been critical of Al Megrahi's release.

Below are a selection of the opinions that have appeared in newspapers in Britain, which witnessed the 1988 atrocity, and America, where many of the families of victims live.

In London, The Times says that the decision to release al Megrahi was taken with "consideration and compassion". But it was "the wrong decision", it said, describing Scotland's Justice Secretary Kenny MacAskill's argument as "eloquent" but "misplaced".

Writing in The Guardian Pamela Dix, whose brother Peter died on the Pan Am flight said: "The image of Megrahi boarding the plane home will live with me for ever."

Dix, an executive director of Disaster Action -- a charity established in 1991 for survivors and bereaved people from over 20 disasters both in the UK and overseas -- added: "It was a bizarre sight. A man who looked faintly like a celebrity in disguise, waiting to board a flight sent to Scotland by [Libyan leader Moammar Gadhafi] to take his man home."

The Telegraph went on to question whether or not the Scottish politicians had thought their decision through, reminding them that the U.S. is Scotland's largest source of inward investment, with more than 500 American-owned businesses employing 90,000 people."

The Daily Mail heaped opprobrium on the decision to release al Megrahi calling it "a shabby deal and the betrayal of justice" as well as criticizing MacAskill.

The Independent asserted that "behind the conviction of one lone man, lies a story which has never been properly investigated -- and may never be after this moment" adding "this is ultimately an act of compassion and the Scots should be congratulated for it."

Under the headline "Scotland's shame" The Chicago Tribune argues that MacAskill's stated reason of compassion for al Megrahi's release wasn't afforded his victims two decades ago.

For the New York Post the decision by Scottish officials was described as "A Suicidal Compassion". They went on to echo the sentiments of the Chicago Tribune saying: "Where was the "compassion" for their loved ones?" saying al Megrahi's release "makes little sense" given that he was sentenced to life imprisonment.

The Wall Street Journal described the decision of the Scottish court "A Second Lockerbie Outrage" saying: "We're not sure what additional compassion is owed to man who has never admitted his guilt..."

In Lockerbie injustice USA Today said: "The hero's welcome al Megrahi received in Libya on Thursday underscored the distastefulness of the entire process."

The Lockerbie terrorist's release is an ugly act of "mercy" thinks the Los Angeles Times arguing that the U.S. governmernt's reaction to al Megrahi's repatriation was "muted" which adds to the insult to justice.

"In reacting to Megrahi's release, relatives of the victims used words such as 'disgusting' and 'outrage.' The Obama administration should have been equally, and openly, appalled." said the newspaper.