(CNN) -- A Dutch Court will decide the fate Friday of 13-year-old Laura Dekker, either making her a potential world-record-breaking sailor, or returning her to school. 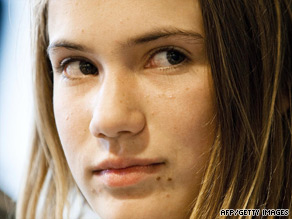 Laura Dekker will find out on Friday whether the Dutch Court will back her record attempt.

Welfare services in the Netherlands have taken legal action to try to stop the teen from attempting to become the youngest person to sail solo around the world because they believe the voyage will be too dangerous.

The Dutch Council for Child Protection has applied to the District Court in the city of Utrecht for Dekker to be made a ward of court so that her parents, who support her plans, temporarily lose the right to make decisions about her.

Laura's father, Dick Dekker, has already had a request for her to miss two years of school turned down.

However, CNN affiliate TVNZ reported that Laura, who was born off the coast of New Zealand and began sailing solo when she was 10, may attempt to obtain a Kiwi passport which would allow her to start her round the world trip from New Zealand shores instead.

Should teen sailor's plan be scuttled? »

Laura's court battle comes as a 17-year-old English teen sailed into the record books Thursday as the youngest person to circumnavigate the globe to date.

Perham set off on his round-the-world trip on November 18. He has been sailing his yacht, TotallyMoney.com, single-handedly, though a support team has been sailing next to him along the way.

Perham told CNN how he battled 50-foot waves and 57 mph winds in the Southern Ocean between Australia and Antarctica. He said at one point, a "freak wave" picked up the boat and turned it on its side.