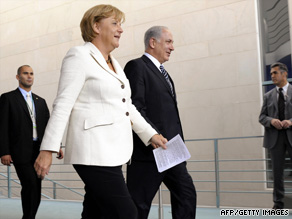 She said international efforts to coax the Islamic republic back to the table face a "decisive point" in September.

"Our offer for talks with Iran for them to stop their nuclear program have been on the table for a long time," she said on Thursday. "But I say again that the time is limited, and we hope to have a positive answer from Iran soon, or we will have to talk about stronger measures.

"That means sanctions in the area of energy and other sensitive areas, such as the financial area," she added. "And we will not just have to think about these, we will have to speak about how we put them in place."

Her comments came after a meeting with Israeli Prime Minister Benjamin Netanyahu, who called Iran a "menace" to world peace. Though Western analysts believe Israel has its own, undeclared nuclear arsenal, Netanyahu said Iran "happens to threaten the existence of my country, and we're not threatening the existence of anyone."

"Israel expects all responsible members of the international community to address this threat, and I was pleased to hear from Chancellor Merkel that Germany is committed to responsibly addressing this threat," he said.

Netanyahu said he believed "real economic pressure" could be placed on Tehran "if the major powers of the world unite."

The U.N. Security Council has asked Iran to halt its uranium enrichment program, and the International Atomic Energy Agency, the U.N. nuclear watchdog, has asked Iran to clear up questions about the nature of its work.